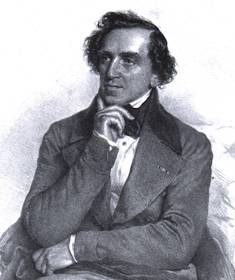 Giacomo Meyerbeer (born near Berlin, 5 September 1791; died Paris, 2 May 1864) was a famous German-born opera composer. He was the most important composer of French Grand opera during the 1830s and 1840s. Although he was tremendously popular in his day, his music is not often played now. 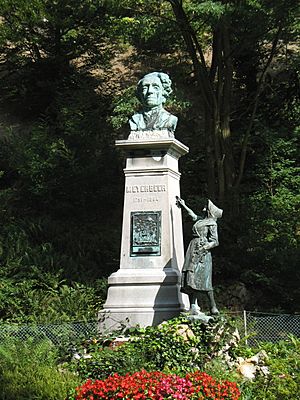 Statue of Meyerbeer in the Belgian town of Spa, where he stayed many times

Meyerbeer was born into a rich Jewish family in Tasdorf (now a part of Rüdersdorf), near Berlin. His father owned large sugar refineries in Berlin and in Italy. His mother also came from a rich family. Her father had been important in Germany’s struggle to be free of the French in 1812 when Napoleon was trying to conquer much of Europe. Giacomo’s mother did a lot of good work trying to help people who were wounded during the Napoleonic wars.

Many famous people came to the house where Giacomo’s family lived. Some of the visitors were from the royal Prussian court, including the future King Friedrich Wilhelm IV. The naturalist and explorer Alexander von Humboldt also visited them quite often.

The first piano teacher the boy had was Franz Lauska, who also taught the royal princes. He also had lessons in composition. Meyerbeer first played in public in 1801 playing Mozart's Piano Concerto in D Minor in Berlin. He wrote his first opera in 1810. In the same year he went to Darmstadt to study with the well-known music theorist Abbé Vogler. There he met the young Carl Maria von Weber who was also a pupil of Vogler. He left Vogler in 1811 and tried to get some work in Munich. In 1813 he found he had been offered a job as court composer to the Grand Duke of Hessen. Vogler had probably recommended him for the job. At this time Meyerbeer was better known as a pianist than as a composer. He travelled to London to hear an important pianist based there, namely J.B.Cramer. There he met other famous pianists such as Kalkbrenner and Ferdinand Ries.

In 1816 Meyerbeer went to Italy. He wanted to learn about Italian opera and collect Italian folksongs. While he intended at first to stay only three months, he stayed most of the next nine years. He made some trips back to Germany and Austria during this time. He composed several operas which became very popular. People started to compare him with the famous Rossini. However, in Germany people were not interested in his music. He took his opera Il crociato in Egitto to London and then to Paris, where it was a success. The opera is remembered now for being the last opera ever to have a part for a castrato singer.

He was becoming well-known now. Spontini asked him to compose an opera for Berlin. He became friends, in Paris, with the librettist Eugène Scribe who had a lot of influence in the French theatre.

From 1825 onwards Meyerbeer spent his life travelling about Europe. He was often in Paris and in Berlin, but did not live in either of these places. He stayed in hotels or private houses wherever he went. One reason why he travelled was because of his health. His wife also had bad health, so they often went to spa towns to try to get better. He also travelled about to watch productions of his operas, and to hear young singers.

When Carl Maria von Weber died, he left an opera, Die drei Pintos, unfinished. It was sent to Meyerbeer in the hope that he would finish it, but he did not seem interested. In the end Mahler finished it many years later.

Meyerbeer made changes to Il crociato in Egitto and turned it into a grand opera for the Opéra in Paris. He changed it from an Italian to a French opera, composing extra dance music and a new overture. He was determined to be famous in Paris.

In 1826 he married his cousin. The couple had five children, of whom the three youngest (all daughters) survived to adulthood.

In 1828 Daniel Auber, a famous French composer of the time, had composed a very popular opera called La muette de Portici. It was the first French grand opera. Meyerbeer realized he could not become really popular by turning his Italian operas into French grand opera, so he took his comic opera Robert le Diable and changed it into a grand opera. Audiences loved it. Within three years it had been performed in 77 theatres in 10 different countries. Many composers made their own arrangements of some of the tunes from the opera. He was given many honours: the Chevalier of the Legion d’honneur, the title of Prussian Hof Kapellmeister (Director of Music at the Royal Court), and was made a member of the Prussian Academy of Arts and a member of the French Institute.

Meyerbeer realized that anything else he wrote would have to be really good. In 1836 he produced another opera Les Huguenots. This too was extremely popular.

In 1842 he went to Boulogne to improve his health. There he met Wagner who asked him for financial help to stage his operas Rienzi and The Flying Dutchman. Meyerbeer lent him money, but stopped giving him money when he heard that Wagner was secretly criticizing him.

When Spontini died Meyerbeer was made Generalmusikdirektor in Berlin. His opera Les Huguenots had at first been forbidden in Germany, but now it was allowed to be performed. As court composer he wrote a grand opera called Ein Feldschlag in Schlesien (A Battle in Silesia), but it never became internationally famous. The main part in the opera was sung by Jenny Lind.

In 1849 he returned to Paris. He wrote several works together with Scribe, whom Meyerbeer described as the best living librettist, and who was one of his closest friends. His opera Le prophète (for which Scribe again wrote the words) earned him a lot of money. The great contralto Pauline Viardot-Garcia sang the main part.

Scribe died in 1861. Meyerbeer worked very hard to try to finish his last opera, L’Africaine. Napoleon III said he wanted the opera to be ready by the winter of 1862-63, but it was not ready until 1864. The work was being rehearsed for its first performance when Meyerbeer suddenly died, without having had the chance to revise it, the way he revised most of his other pieces.

Meyerbeer’s body was taken to Berlin where it was buried in the Jewish cemetery in a vault that belonged to his family.

Meyerbeer was always more popular in France than in Germany. His operas are about the society of wealthy people. The sounds he made with his orchestra are often deliberately harsh. In this he is like Beethoven in his final years, and Berlioz. Sometimes he used new instruments such as the bass clarinet and the saxophone. He always thought carefully about what his singers were capable of when writing his music. He enjoyed working with different singers, among them Velluti, who was the last of the great operatic castrati. He took great trouble to give his singers rests during the opera so that they would still be in good voice for the climax of the story. He liked scenes with large crowds. He composed his dance music, in particular, very carefully. Often he would throw it away and start again if the dancers were not happy with it.

Besides his operas he also wrote orchestral pieces for special occasions. He also wrote some songs for performance in the salon.

Meyerbeer was one of the richest men in Europe. This is why some people hated him.

Meyerbeer’s reputation after his death

Meyerbeer’s operas were very popular in the middle of the 19th century, but by the end of the century they had gone out of fashion. From 1933 to 1945 his music was banned in Germany by the Nazis because he was Jewish. Today there is some interest again, but nothing like the huge popularity he had in his lifetime.

All content from Kiddle encyclopedia articles (including the article images and facts) can be freely used under Attribution-ShareAlike license, unless stated otherwise. Cite this article:
Giacomo Meyerbeer Facts for Kids. Kiddle Encyclopedia.