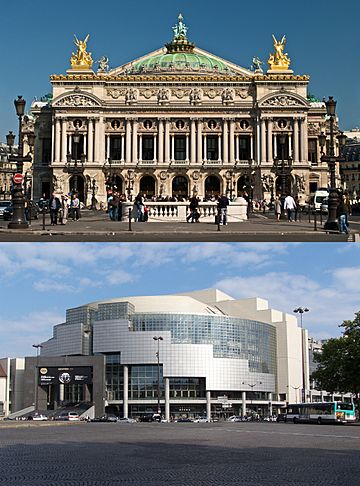 The Paris Opera (French: Opéra de Paris; French: ) is the primary opera and ballet company of France. It was founded in 1669 by Louis XIV as the Académie d'Opéra, and shortly thereafter was placed under the leadership of Jean-Baptiste Lully and officially renamed the Académie Royale de Musique, but continued to be known more simply as the Opéra. Classical ballet as it is known today arose within the Paris Opera as the Paris Opera Ballet and has remained an integral and important part of the company. Currently called the Opéra National de Paris, it mainly produces operas at its modern 2700-seat theatre Opéra Bastille which opened in 1989, and ballets and some classical operas at the older 1970-seat Palais Garnier which opened in 1875. Small scale and contemporary works are also staged in the 500-seat Amphitheatre under the Opéra Bastille.

The company's annual budget is in the order of 200 million euros, of which 100 million come from the French state and 70 million from box office receipts. With this money, the company runs the two houses and supports a large permanent staff, which includes the orchestra of 170, a chorus of 110 and the corps de ballet of 150.

Each year, the Opéra presents about 380 performances of opera, ballet and other concerts, to a total audience of about 800,000 people (of whom 17% come from abroad), which is a very good average seat occupancy rate of 94%. In the 2012/13 season, the Opéra presented 18 opera titles (two in a double bill), 13 ballets, 5 symphonic concerts and two vocal recitals, plus 15 other programmes. The company's training bodies are also active, with 7 concerts from the Atelier Lyrique and 4 programmes from the École de Danse.

King Louis XIV allowed Jean-Baptiste Lully to start the Académie Royale de Musique in 1672. This was an organization that included opera, ballet, and music. The ballet company was part of the opera company. Then Louis XIV started the ballet school, called Académie Royale de Danse, in 1661. From 1671 until Lully's death in 1687, the school was directed by the great dancing master Pierre Beauchamp, the man who set down the five positions of the feet.

In 1713 King Louis XIV made the Opera company a state institution. There was a group of professional dancers called Le Ballet de l'Opéra. From that time until 1875 they used lots of theatres, each one of which was destroyed by a fire. All these companies were called Paris Opéra or Opéra de Paris.

On 29 October 1873, the old Paris Opéra, known as the Théâtre de l'Académie Royale de Musique, which had been used since 1821, was destroyed by a fire which burned for 27 hours. By 1875 the opera company moved to the new Palais Garnier which was part of the rebuilding of Paris by Emperor Napoleon III.

When the Opéra Bastille was built in 1989 the company chose it as their main theatre.

All content from Kiddle encyclopedia articles (including the article images and facts) can be freely used under Attribution-ShareAlike license, unless stated otherwise. Cite this article:
Paris Opera Facts for Kids. Kiddle Encyclopedia.