Kids Encyclopedia Facts
This page is about the Paris opera house. For the London opera house associated with the premieres of several Gilbert and Sullivan operettas, see Opera Comique. For the opera style, see Opéra-comique. 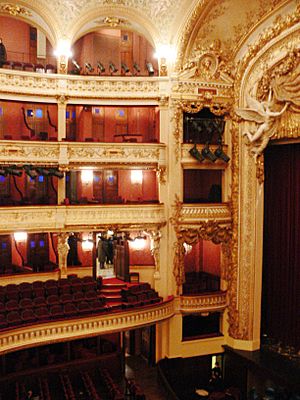 Inside of the present-day Opéra-Comique

The Opéra-Comique is an opera house and opera company in Paris. Its full name is théâtre national de l’Opéra-Comique (National Opéra Comic Theatre).

The Opéra-Comique company was started in 1714 to give somewhere to perform French operas. At the time operas throughout Europe were nearly always in Italian. Opéra-comique (literally: Comic opera) was a French tradition. The operas in this tradition were performed with spoken dialogue between the musical numbers. This is why the opera house and company were given that name.

The Opéras-Comiques were more popular and less formal that the traditional Italian operas that were performed at the Académie Royale de Musique. During the three centuries of its existence there have been several changes to it. For a time the Opéra-Comique and the Opéra were organized by the same institution.

The Opéra-Comique put on first performances of many famous operas, especially Bizet's Carmen on 3 March 1875 and Debussy's only opera, Pelléas et Mélisande, on 30 April 1902. Berlioz's The Damnation of Faust was also first performed there on 6 December 1846. That first performance was a disaster. 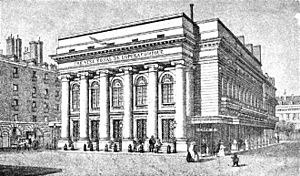 The building in which the Opéra-Comique performs is called the "salle Favart,". It is not the same building as in 1714. Two previous buildings were burnt down in 1838 and 1887. The present building was built in 1898.

All content from Kiddle encyclopedia articles (including the article images and facts) can be freely used under Attribution-ShareAlike license, unless stated otherwise. Cite this article:
Opéra-Comique Facts for Kids. Kiddle Encyclopedia.