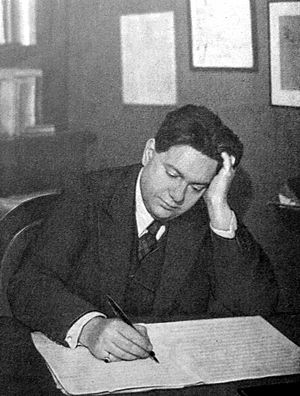 Darius Milhaud (pronounced "DAR-yus MEE-oh") (born Marseille, 4 September 1892; died Geneva 22 June 1974) was a French composer. He was a member of the group called Les Six. He is one of the most important French composers of the 20th century. He wrote more than 400 compositions. His music is often influenced by jazz and polytonality (music in more than one key at once).

Milhaud's family were Jewish. He grew up in Aix-en-Provence. His father was an almond dealer. When he was very small he often listened to the songs that were being sung by the women who were sorting out the nuts. They were folksongs from the Provence. When he was a young man he liked to go for walks in the Provence country. This was an important part of his life.

Milhaud's parents liked music. His father was a pianist and often played at local music gatherings. His mother had a nice contralto voice. When he was seven he learned to play the violin. He loved the music of Claude Debussy, whom he met once.

Milhaud studied in Paris at the Paris Conservatory where he met Arthur Honegger and Germaine Tailleferre who were also to become members of Les Six. He studied composition under Charles-Marie Widor and harmony and counterpoint with André Gédalge. He also studied privately with Vincent d'Indy. He taught himself to play the piano. In Paris he was able to listen to music by a lot of great composers.

He was terribly sad when a close friend was killed in World War I. He decided to go to Brazil. He worked there for nearly two years, deciphering codes. He liked the sounds of the jungle. These sounds were to have an impact on his music. The other great influence was jazz, which he heard in 1922 in New York.

Milhaud returned to France and worked very hard. He often travelled. In 1940 he had to emigrate to the United States because the Nazis were arresting Jewish musicians. In America he gave lectures.

His health became poor. He had rheumatoid arthritis for nearly all his adult life, and by 1948 he was in a wheelchair. He still continued to travel, and to teach, for as long as possible. Probably his most famous student was Dave Brubeck.

In 1925 Milhaud married his cousin, an actress called Madeleine Milhaud. She often performed speaking parts in her husband's musical works. In his final years, she devoted herself to looking after him. She died in Paris on 17 January 2008 at the age of 105.

All content from Kiddle encyclopedia articles (including the article images and facts) can be freely used under Attribution-ShareAlike license, unless stated otherwise. Cite this article:
Darius Milhaud Facts for Kids. Kiddle Encyclopedia.