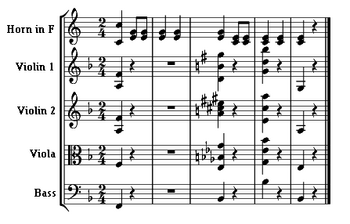 Mozart used polytonality in his A Musical Joke for comic effect.

Polytonality is the use in music of several keys at the same time. Music such as this is called polytonal.

Bitonality is the use in music of two keys at the same time. Music such as this is called bitonal.

In 20th century some composers sometimes wrote music which is in more than one key at once. A well-known example is the beginning of the second tableau of Igor Stravinsky's ballet, Petrushka. The first clarinet plays a melody that uses the notes of the C major chord, while the second clarinet plays a different version of the same melody using the notes of the F sharp major chord.

Composers who have used bitonality or polytonality include Igor Stravinsky, Darius Milhaud, Béla Bartók, Charles Ives and many others.

All content from Kiddle encyclopedia articles (including the article images and facts) can be freely used under Attribution-ShareAlike license, unless stated otherwise. Cite this article:
Polytonality Facts for Kids. Kiddle Encyclopedia.