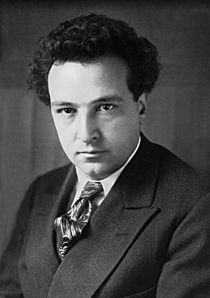 Arthur Honegger (10 March 1892 - 27 November 1955) was a Swiss composer, who was born in Le Havre, France and lived a large part of his life in Paris. He was a member of the group of composers called Les Six. His most popular piece of music is an orchestral work called Pacific 231, which imitates the sound of a steam locomotive.

His full name was Oscar-Arthur Honegger, but his first name was never used. He studied harmony and violin in Paris until his parents moved to Zürich, Switzerland, when he studied at the Conservatory there. He then went back to Paris to study with Charles-Marie Widor and Vincent d'Indy. He wrote a ballet Le dit des jeux du monde in 1918. In 1926 he married Andrée Vaurabourg, a pianist and fellow student at the Paris Conservatoire. They often went on tour together, and his wife played the piano parts to his compositions. The couple had one daughter, Pascale, born in 1932. Honegger also had a son, Jean-Claude (1926-2003) whose mother was the singer Claire Croiza.

In the early 1920s Honegger became famous with the "dramatic psalm" "Le Roi David" ("King David"), which is still often sung by choirs. He wrote a lot of music between the wars, including the oratorio Jeanne d'Arc au bûcher, one of his best works. It tells the story of Joan of Arc.

During World War II Honegger could not leave Paris. He joined the French Resistance. He continued to write very serious music, including four symphonies (numbers 2-5) and some religious music.

Honegger loved trains. As a student he had spent some time travelling to Paris twice a week by train from Le Havre. His popular orchestral work Pacific 231 describes a train on the Canadian Pacific Railway. It was an early piece, written in 1923.

In 1947 Honegger suffered a severe heart attack, and after that he composed little. A second heart attack caused his death eight years later in Paris.

Honegger's music is different to that of the other members of Les Six, partly because Honegger liked the Romantic music of Wagner, Strauss and Reger. His music is tonal but with numerous strong dissonances. His musical style was also influenced by the music of Bach.

All content from Kiddle encyclopedia articles (including the article images and facts) can be freely used under Attribution-ShareAlike license, unless stated otherwise. Cite this article:
Arthur Honegger Facts for Kids. Kiddle Encyclopedia.