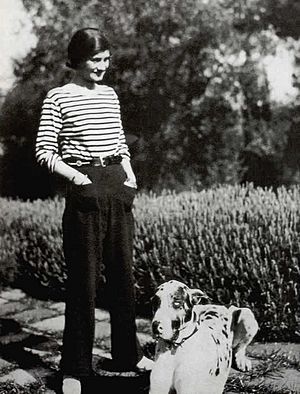 Gabrielle Bonheur "Coco" Chanel (19 August 1883 – 10 January 1971) was a French fashion designer and businesswoman. She was the founder and namesake of the Chanel brand. Along with Paul Poiret, Chanel was credited in the post-World War I era with liberating women from the constraints of the "corseted silhouette" and popularizing a sporty, casual chic as the feminine standard of style.

A prolific fashion creator, Chanel extended her influence beyond couture clothing, realizing her design in jewelry, handbags, and fragrance. Her signature scent, Chanel No. 5, has become an iconic product. She is the only fashion designer listed on TIME magazine's list of the 100 most influential people of the 20th century. Chanel designed her iconic interlocked-CC monograph, meaning Coco Chanel, using it since the 1920's. 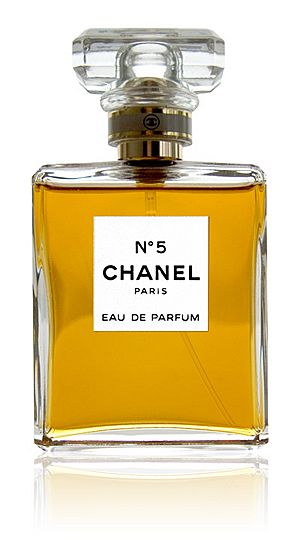 Chanel was born in 1883 in Saumur, France. In her youth, she was a seamstress and a nightclub singer. In 1910, she opened a hat shop. In 1919, she opened a house of fashion in Paris, and introduced her perfume, Chanel No. 5, in 1922. She retired in 1939, but returned to fashion with great success in 1954. She is famous for the little black dress, Chanel No. 5, the most famous women's perfume in the world, and the knee-long skirt and box jacket suit worn with pearl necklace.

Chanel was known for her lifelong determination, ambition, and energy which she applied to her professional and social life. She achieved both financial success as a businesswoman and catapulted to social prominence in French high society, thanks to the connections she made through her work. These included many artists and craftspeople to whom she became a patron.

In 1913, Chanel opened her first shop in Deauville, France. Society women liked her simple wardrobe. In 1915, she opened a second shop in Biarritz. Chanel became one of the first women fashion designers to create simple and practical clothes for the sporty women of the era. Short hair, tans, and casual styles were the new trends. She banned corsets and other uncomfortable garments.

In 1939, at the beginning of World War II, Chanel closed her shops, maintaining her apartment situated above the couture house at 31 Rue de Cambon. She claimed that it was not a time for fashion; as a result of her action, 4,000 female employees lost their jobs.

Rumors arose about Chanel's activities in the course of the German occupation of France during World War II, and she was criticized for being too comfortable with the Germans but never thoroughly investigated.

After several years in Switzerland post war, she returned to Paris and revived her fashion house. In 2011, Hal Vaughan published a book on Chanel based on newly declassified documents of that era, revealing that she had collaborated with Germans in intelligence activities.

In 1921, while in Monte Carlo Chanel became acquainted with Samuel Goldwyn. Goldwyn offered Chanel a tantalizing proposition. For the sum of a million dollars (approximately seventy-five million in twenty-first century valuation), he would bring her to Hollywood twice a year to design costumes for MGM stars. Chanel accepted the offer.

As 1971 began, Chanel was 87 years old, tired, and ailing. She carried out her usual routine of preparing the spring catalogue. She had gone for a long drive the afternoon of Saturday, 9 January. Soon after, feeling ill, she went to bed early. She died on Sunday, 10 January 1971, at the Hotel Ritz, where she had resided for more than 30 years. Her funeral was held at the Église de la Madeleine; her fashion models occupied the first seats during the ceremony and her coffin was covered with white flowers—camellias, gardenias, orchids, azaleas and a few red roses. She went out in real Chanel style, announcing: "You see, this is how you die." Her grave is located in the Bois-de-Vaux Cemetery, Lausanne, Switzerland.

All content from Kiddle encyclopedia articles (including the article images and facts) can be freely used under Attribution-ShareAlike license, unless stated otherwise. Cite this article:
Coco Chanel Facts for Kids. Kiddle Encyclopedia.