Moulins is a commune in the Allier department in the Auvergne-Rhône-Alpes region in central France.

It is the préfecture (capital) of the department and the historical capital of the old province of Bourbonnais (the Duchy of Bourbonnais).

Moulins experienced its golden age in the 15th century, when the Dukes of Bourbon lived in the city on the Allier river. The region of the northern Massif Central where is Moulins is called the Bourbonnais after the House of Bourbon.

Moulins became the capital of Allier on 4 March 1790 with the creation of the departments in France.

During the German occupation in the Second World War, the border between occupied France and the pro-German France (Vichy France) went through the midst of Moulins.

The distances from Moulins to other cities are:

The climate of Moulins, in the Köppen climate classification, is Cfb - Oceanic climate with template summers.

The inhabitants of Moulins are known, in French, as Moulinois (women: Moulinoises).

Evolution of the population in Moulins 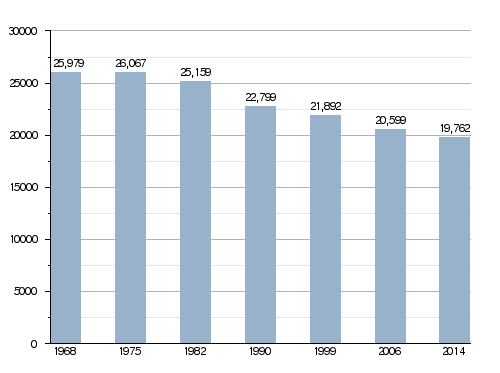 Moulins is the prefecture of the Allier department since 1800. It is also the capital of the arrondissement of Moulins and the administrative centre (French: chef-lieu) of two cantons:

Moulins is twinned with:

Some interesting places in Moulins are:

People from or related to Moulins

All content from Kiddle encyclopedia articles (including the article images and facts) can be freely used under Attribution-ShareAlike license, unless stated otherwise. Cite this article:
Moulins, Allier Facts for Kids. Kiddle Encyclopedia.