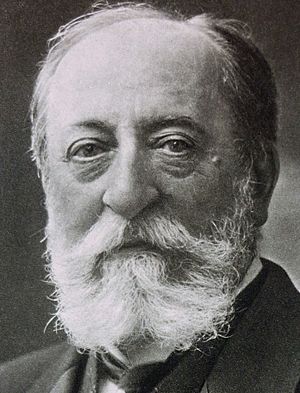 Camille Saint-Saens (French: Camille Saint-Saëns) (born Paris 9 October 1835; died Algiers, 16 December 1921) was a French composer, pianist and organist. He was one of the greatest composers of his day. He composed lots of music of different kinds. Among his best works are his Symphony no 3 (with organ) , Piano Concerto no 2, Violin Concerto no 3, Cello Concerto no 1, the opera Samson and Delilah and the Danse Macabre. His most popular work, however, is the Carnival of the Animals. Saint-Saens hated being thought of as “the composer of the Carnival of the Animals". He said he had only written it for a bit of fun and he did not want anyone to perform it. Today it still remains one of the most popular pieces for children.

Three months after Saint-Saens was born his father died. Saint-Saens was often ill with tuberculosis when he was very small and this carried on throughout his life. He was brought up by his mother and his aunt. this illness still didn't hold Saint-Saens back. at the age of two his aunt taught him the piano. When he was ten he played piano concertos by Beethoven and Mozart at a public concert, playing everything from memory. He was very good at school and was interested in lots of subjects including science and philosophy. In 1858 he published some duets for harmonium and piano and he used the money to buy a telescope.

He studied music at the Paris Conservatoire and was a brilliant student, although he did not win the Prix de Rome. He soon became known as a composer, pianist and organist and he made many friends, among them Gounod, Berlioz and Rossini. Liszt thought he was the greatest organist in the world. Like Liszt, Saint-Saëns was often very kind to other composers and helped them to become known by playing and conducting their music. He was the first person to conduct Liszt’s symphonic poems in France. He himself wrote symphonic poems such as Le Rouet d’Omphale (1871) and Danse Macabre (1874). The idea of music which describes a story was quite a new idea at that time. He also helped people to like Bach whose music had been forgotten for a long time.

In the 1860s his fame spread and he also did some teaching at the École Niedermeyer which educated young musicians for church music. His pupils included Faure, Messager and Gigout who all became lifelong friends. He also founded the Société Nationale de Musique which helped new music to be performed. Faure, Cesar Franck and Lalo were all members. The society gave first performances of works by Saint-Saens, Chabrier, Debussy, Dukas and Ravel and others.

Saint-Saens married a 19-year-old girl. The marriage was not a success. They had two sons who died within six weeks of one another: the baby from an illness and the two-year-old from falling out of a fourth floor window. Saint-Saens blamed his wife and they eventually divorced.

For many years Saint-Saens travelled all over the world as a famous musician. Eventually he became less popular in France, but in England and the United States he was still very much admired. He played for Queen Victoria and spent some time studying original manuscripts of Handel in the library of Buckingham Palace. He was awarded the title of Doctor by the Universities of Oxford and Cambridge and was made a Commander of the Victorian Order because he had composed a march for the coronation of King Edward VII in 1902. He died in Algiers in 1921. His funeral was in the cathedral there, and his body was then taken back to Paris where he was given a state funeral at the church of Madeleine.

Saint-Saens was more famous in the concert hall than he was in the theatre. He wrote 13 operas, but only one of them is still regularly performed: Samson et Dalila (Samson and Delilah). One of the arias from this opera, Mon cœur s’ouvre à ta voix, is especially famous.

Saint-Saens wrote many concertos, symphonies, sonatas and chamber music. He often uses the style of dance music and creates a happy atmosphere by repeating certain patterns. His music is late Romantic, but based on the classical traditions rather than following the style of Wagner like many other French composers were doing at the time.

All content from Kiddle encyclopedia articles (including the article images and facts) can be freely used under Attribution-ShareAlike license, unless stated otherwise. Cite this article:
Camille Saint-Saëns Facts for Kids. Kiddle Encyclopedia.