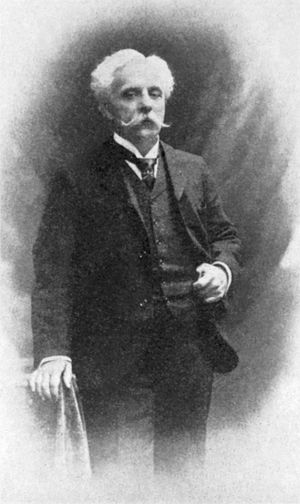 Gabriel Urbain Fauré (born Pamiers, Ariège, Midi-Pyrénées, May 12, 1845; died Paris, November 4, 1924) was a French composer, organist, pianist, and music teacher. He was the most important French composer of his time. The way he wrote music, especially his harmonies, had a big influence on many 20th century composers. Most French composers at the time became famous by writing operas, but Faure only wrote one opera. His most important works are his French songs, chamber music and piano music. His Requiem (which includes a solo, Pie Jesu, for a treble singer or soprano) is one of the most popular of all requiems and can be performed with quite a small orchestra and choir. Other very popular pieces are his Berçeuse from the Dolly Suite for piano duet, the Sicilienne from the music for Pelléas et Mélisande, and the song Après un rêve which is sometimes also played by a solo instrument, e.g. the cello. 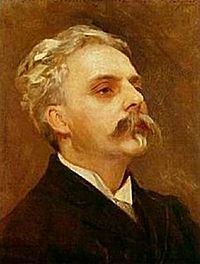 Portrait in oils of Gabriel Fauré by John Singer Sargent, about 1889 (Paris Museum of Music)

Fauré came from the south of France. He was born into a large family and was sent to live with a foster-nurse for four years. When he was quite small he often played the harmonium at the small chapel attached to the school where his father was director. A blind lady heard him and told his father that he ought to send him to a good music school. His father did not want to at first, but when the boy was nine he was sent to study at the École Niedermeyer in Paris. This was a school which trained young people to become church organists and choir directors. He spent eleven years there and had a good musical education. One of his teachers was the great composer Camille Saint-Saëns.

At first he held several jobs in churches, playing and accompanying the choirs. During the Franco-Prussian War Faure served in the army and did some teaching. When he returned to Paris in October of 1871 he got the job of choir accompanist at a big church in Paris called Saint-Sulpice. He often met up with Saint-Saëns and his friends who included the composers Lalo, Duparc, d’Indy and Chabrier. Several of these musicians, including Fauré himself, formed a music society called Société Nationale de Musique in 1871.

In 1874 Saint-Saëns retired from the church called the Madeleine and Fauré became choirmaster. In the same year he became engaged to Marianne Viardot, daughter of the singer Pauline, but then Marianne broke off the engagement. He travelled to Weimar to hear Richard Wagner's Der Ring des Nibelungen. Fauré liked Wagner’s music but it did not influence him.

In 1883 Fauré married Marie Fremiet. They had two sons. He had to spent a lot of time earning money by teaching to keep his family and so he did not have much time to compose except during the summer. His publishers did not pay him much money for his compositions.

In 1892 he became inspector of the music conservatories in the French provinces, which meant he no longer had to teach amateur students. In 1896 he finally became chief organist at the Église de la Madeleine. He also became professor of composition at Paris Conservatoire. Here he taught several students who became important French composers, including Maurice Ravel, Nadia Boulanger and Charles Koechlin. In 1905 he became director of the conservatoire.

As he became older he became deaf. High and low pitches sounded muddled to him. He retired from the Conservatoire in 1920 at the age of 75. In that year he received the Grand Cross of the Légion d’Honneur. It was unusual for a musician to have such a high honour. His health became poor, partly because he smoked heavily. He died in Paris from pneumonia in 1924 and was given a state funeral. .

Gabriel Fauré is the greatest composer of French art song, or mélodie. He learned a great deal at the École Niedermeyer about how to write beautiful, flowing harmonies. He also studied the church modes. This can be heard in a lot of his music. He wrote several song cycles (groups of songs) including one called La Bonne Chanson. Fauré's piano works are mostly short works such as barcarolles, nocturnes and impromptus. They are often full of arpeggiated figures with the melody going from one hand to the other. His chamber works include piano quartets and quintets, a string quartet, a piano trio, two sonatas for violin and piano and two for cello and piano. His Élégie for cello and piano is especially well-known. He never showed a great deal of interest in writing for the orchestra. His orchestral works mostly consist of incidental music. His Requiem is popular both with amateur and professional choirs.

All content from Kiddle encyclopedia articles (including the article images and facts) can be freely used under Attribution-ShareAlike license, unless stated otherwise. Cite this article:
Gabriel Fauré Facts for Kids. Kiddle Encyclopedia.