Pamiers (Occitan: Pàmias) is a commune in the Ariège department in the Occitanie region in southwestern France. It is a subprefecture of the department. Although Pamiers is the largest city in Ariège, the capital is Foix, a smaller city.

In 1111, the city was officially founded by the Count Roger II of Foix and the abbot of the sanctuary of Saint Antonin of Pamiers; they built a castle (now demolished) and named it Castrum Appamiae, after a Syrian city, Apamea, that was visited by Roger II during the First Crusade. A church was built at the foot of the castle (Our Lady of Mercadal) where is now the cathedral.

The commune of Pamiers is surrounded by the communes:

The climate of Pamiers, in the Köppen climate classification, is Cfb - Oceanic climate with template summers.

The inhabitants of Pamiers are known, in French, as Appaméens (women: Appaméennes).

With a population of 15,518, Pamiers is the city in the department with more people living in it; its population density is of 338 inhabitants/km2.

Evolution of the population in Pamiers 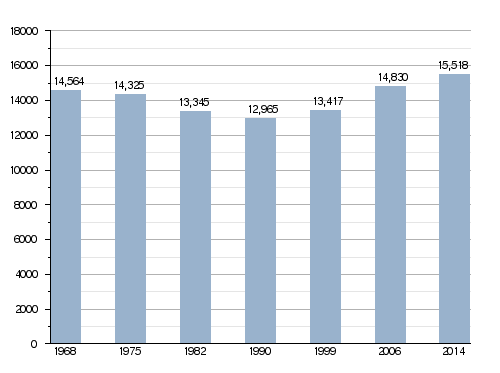 Pamiers is a subprefecture of the Ariège department, the capital of the arrondissement of Pamiers and the administrative centre (French: chef-lieu) of two cantons:

Pamiers is twinned with:

People from or related to Prades

All content from Kiddle encyclopedia articles (including the article images and facts) can be freely used under Attribution-ShareAlike license, unless stated otherwise. Cite this article:
Pamiers Facts for Kids. Kiddle Encyclopedia.