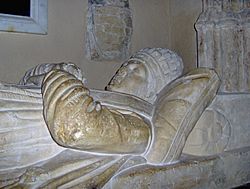 Pope Benedict XII (Latin: Benedictus Duodecimus; died April 25, 1342), born Jacques Fournier, was a French priest of the Roman Catholic Church and the 198th Pope from 1334 to 1342.

He was the third of the seven popes who lived in Avignon in France.

Jacques Fournier is believed to have been born in Saverdun in the Comté de Foix near Toulouse.

He became a Cistercian monk; and he studied at the University of Paris.

In 1311, he was made Abbot of Fontfroide Abbey.

In 1317, Fourier he was made bishop of Pamiers.

In 1327, he became Bishop of Mirepoix in the Ariège.

Pope John XXIII made Fourier a cardinal in 1327.

Cardinal Fourier was elected pope in 1335; and he chose to be called Benedict XII.

Pope Benedict was involved in Italian and European political disputes.

Benedict XII ordered the construction of the Palais des Papes in Avignon.

All content from Kiddle encyclopedia articles (including the article images and facts) can be freely used under Attribution-ShareAlike license, unless stated otherwise. Cite this article:
Pope Benedict XII Facts for Kids. Kiddle Encyclopedia.