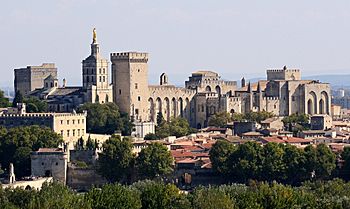 The Palace of the Popes (Palais des Papes) in Avignon

The Avignon Papacy refers to the 70 years when the popes lived in Avignon instead of living in Rome. Philip IV of France had forced a papal conclave to elect a French pope, who decided he did not want to live in Rome.

This period started in 1309 and ended in 1376 when Pope Gregory XI returned to the pope's residence in Rome.

There was an attempt to return the papacy to Avignon, but it was not successful.

All content from Kiddle encyclopedia articles (including the article images and facts) can be freely used under Attribution-ShareAlike license, unless stated otherwise. Cite this article:
Avignon Papacy Facts for Kids. Kiddle Encyclopedia.