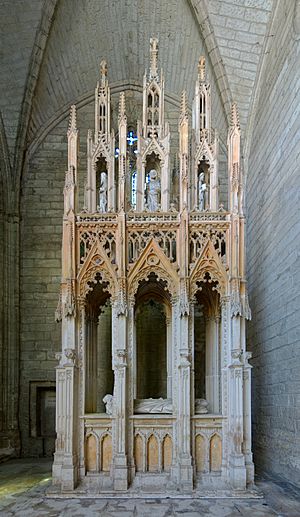 He was the fifth of the seven popes who lived in Avignon in France.

Étienne Aubert was born in the hamlet of Les Monts, which is today part of the commune of Beyssac in the Corrèze department of France. He was the son of Adhemar Aubert (1260-?), seigneur de Montel-De-Gelas in Limousin.

In 1342, he was raised to the position of cardinal.

Cardinal Aubert was elected pope on December 18, 1352. He chose to be called Innocent VI.

Pope Innocent was involved in Italian and European political disputes.

The tomb of Innocent VI is at the Carthusian monastery of Villeneuve-les-Avignon.

All content from Kiddle encyclopedia articles (including the article images and facts) can be freely used under Attribution-ShareAlike license, unless stated otherwise. Cite this article:
Pope Innocent VI Facts for Kids. Kiddle Encyclopedia.