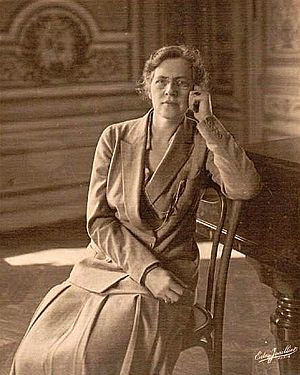 Juliette Nadia Boulanger ( 16 September 1887 – 22 October 1979) was a French composer, conductor, and teacher. She taught many of the leading composers and musicians of the 20th century, and also performed occasionally as a pianist and organist. Her younger sister Lili Boulanger was also a composer.

From a musical family, she achieved early honours as a student at the Conservatoire de Paris but, believing that she had no particular talent as a composer, she gave up writing music and became a teacher. In that capacity, she influenced generations of young composers, especially those from the United States and other English-speaking countries. Among her students were those who became leading composers, soloists, arrangers, and conductors, including Grażyna Bacewicz, Burt Bacharach, Daniel Barenboim, İdil Biret, Elliott Carter, Aaron Copland, John Eliot Gardiner, Philip Glass, Roy Harris, Quincy Jones, Dinu Lipatti, Igor Markevitch, Astor Piazzolla, and Virgil Thomson.

Boulanger taught in the US and England, working with music academies including the Juilliard School, the Yehudi Menuhin School, the Longy School, the Royal College of Music and the Royal Academy of Music, but her principal base for most of her life was her family's flat in Paris, where she taught for most of the seven decades from the start of her career until her death at the age of 92.

Boulanger was the first woman to conduct many major orchestras in America and Europe, including the BBC Symphony, Boston Symphony, Hallé, New York Philharmonic and Philadelphia orchestras. She conducted several world premieres, including works by Copland and Stravinsky.

All content from Kiddle encyclopedia articles (including the article images and facts) can be freely used under Attribution-ShareAlike license, unless stated otherwise. Cite this article:
Nadia Boulanger Facts for Kids. Kiddle Encyclopedia.