A song cycle in classical music is a group of songs that belong together. Although each song may be sung separately, the composer really imagined that they would be performed together as one work. Sometimes they tell a story, but sometimes they just belong together because they are about the same idea (e.g. the sadness that can be caused by love). They are often for solo voice and piano accompaniment, but they can also be without accompaniment, or with several instruments or even a whole orchestra. The words of a cycle are often by the same poet, but this is not always the case.

Song cycles started to become popular with composers in the Romantic period. Although there were examples of song cycles written before that, it was the German composers of the 19th century who are most often thought of as writers of song cycles. Their songs are called "Lieder". 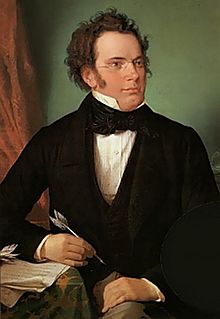 All content from Kiddle encyclopedia articles (including the article images and facts) can be freely used under Attribution-ShareAlike license, unless stated otherwise. Cite this article:
Song cycle Facts for Kids. Kiddle Encyclopedia.