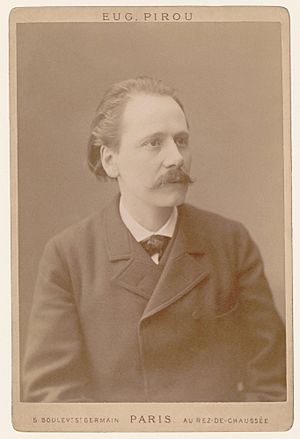 Jules Émile Frédéric Massenet (12 May 1842 – 13 August 1912) was a French composer of the Romantic era best known for his operas, of which he wrote more than thirty. The two most frequently staged are Manon (1884) and Werther (1892). He also composed oratorios, ballets, orchestral works, incidental music, piano pieces, songs and other music. 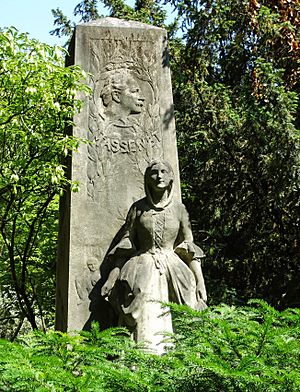 Jules’ father had a business making agricultural tools. His mother gave him his first piano lessons. In 1847 his father retired and the family moved to Paris. While still a schoolboy, Massenet was admitted to France's principal music college, the Paris Conservatoire. There he studied under Ambroise Thomas, whom he greatly admired. After winning the country's top musical prize, the Prix de Rome, in 1863, he composed produced music in many genres, but quickly became best known for his operas.

Between 1867 and his death forty-five years later he wrote more than forty stage works in a wide variety of styles, from opéra-comique to grand-scale depictions of classical myths, romantic comedies, lyric dramas, as well as oratorios, cantatas and ballets. Massenet had a good sense of the theatre and of what would succeed with the Parisian public. Despite some miscalculations, he produced a series of successes that made him the leading composer of opera in France in the late 19th and early 20th centuries.

In 1870 he served in the National Guard during the Franco-Prussian war. After the war he continued to compose, and he became professor of composition at the Conservatoire. He spent many years working on an opera Le Roi de Lahore. This was a great success and helped him to become internationally famous. For many years he spent the winter in Paris and the summer in various places in the country where he could compose. 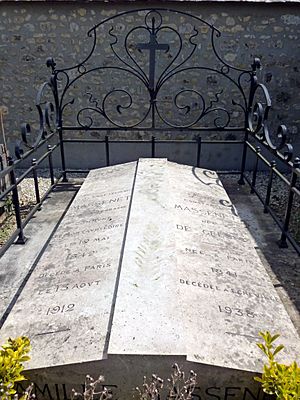 Grave of Jules Massenet at the cemetery of Égreville

In 1884 his opera Manon was produced at the Opéra-comique. This made him clearly the most famous opera composer of his time. It was an opéra-comique with some speech over the music. During the next 28 years he composed another 20 operas. Another opera that was particularly famous was Werther. It was first performed in 1892 in Vienna and a year later in Paris. It was soon being performed in all the big European opera houses.

He continued to compose lots of music even when his health was failing during his last years. He was a quiet, family man who hated it when people made a fuss about him. He liked best to spend his evenings quietly at home, or in the countryside during the summer. He continued to compose in a Romantic style to the end of his life.

In August 1912 Massenet went to Paris from his house at Égreville to see his doctor. The composer had been suffering from abdominal cancer for some months, but his symptoms did not seem imminently life-threatening. Within a few days his condition deteriorated sharply. His wife and family hastened to Paris, and were with him when he died, aged seventy. By his own wish his funeral, with no music, was held privately at Égreville, where he is buried in the churchyard.

All content from Kiddle encyclopedia articles (including the article images and facts) can be freely used under Attribution-ShareAlike license, unless stated otherwise. Cite this article:
Jules Massenet Facts for Kids. Kiddle Encyclopedia.