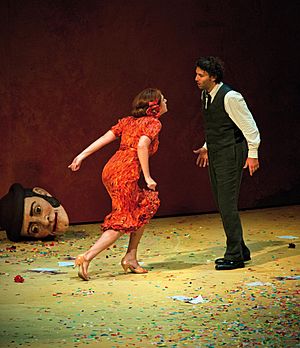 Carmen is a French opera written and first performed on 3 March 1875 by Georges Bizet. The story is set in Spain. It is based on the story of the same title by Prosper Mérimée.

Carmen is about a gypsy girl who works in a factory. She falls in love with a soldier called Don José, who loves her. However, he is already engaged to somebody else. Later, he leaves the girl he was engaged to and the army for Carmen. Running away together, they are happy for a while until Carmen decides she loves a bullfighter called Escamillo. She leaves Don José. One day when Carmen is watching a bullfight, Don José waits for her and then tries to make her come back. She refuses, so he stabs her to death. Horrified at what he has done, he goes to jail.

All content from Kiddle encyclopedia articles (including the article images and facts) can be freely used under Attribution-ShareAlike license, unless stated otherwise. Cite this article:
Carmen Facts for Kids. Kiddle Encyclopedia.