Kids Encyclopedia Facts
This page is about the opera style. For the Paris opera house, see Opéra-Comique. For the London opera house where several of the Gilbert and Sullivan comic operas were performed, see Opera Comique. 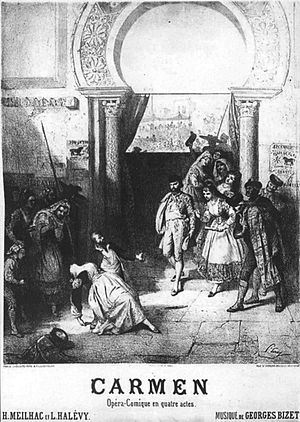 A poster for Carmen, probably the most famous opéra comique

Opéra comique is a French opera tradition. Many French operas from the early 18th century to the early 20th century are opéras comiques. In this French tradition there is spoken dialogue as well as songs and dances. It developed from the popular vaudevilles.

In Paris there is a theatre called the Opéra-Comique where these operas were performed. Although “opéra comique” means “comic opera” it is not necessarily comedy. Bizet’s opera Carmen is probably the most famous opéra comique, and it is a tragedy. By the late 19th century the opéra-comique usually had no spoken dialogue. There was music all the way through (as there is in Carmen).

All content from Kiddle encyclopedia articles (including the article images and facts) can be freely used under Attribution-ShareAlike license, unless stated otherwise. Cite this article:
Opéra-comique Facts for Kids. Kiddle Encyclopedia.