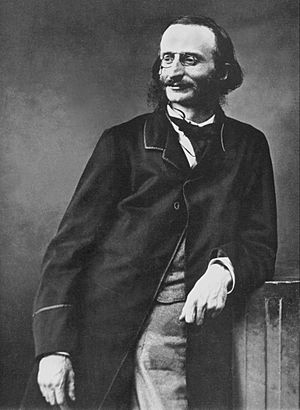 Jacques Offenbach (20 June 1819 – 5 October 1880), composer and cellist, was one of the originators of the operetta form, a precursor of the modern musical comedy. He was one of the most influential composers of popular music in Europe in the 19th century, and many of his works remain. His best-known works were continually revived during the 20th century, and many of his operettas continue to be staged in the 21st.

When Jacob was six years old, his father taught him to play the violin; within two years the boy was composing songs and dances, and at the age of nine he took up the cello. When he was of 14, he was accepted as a student at the Paris Conservatoire but found academic study unfulfilling and left after a year. From 1835 to 1855 he earned his living as a cellist, achieving international fame, and as a conductor. His ambition, however, was to compose comic pieces for the musical theatre.

Offenbach's many operettas were extremely popular both in France and elsewhere in the 1850s and 1860s. They combined political and cultural satire with witty grand opera parodies. His popularity in France declined in the 1870s after the fall of the Second Empire.

Offenbach died in Paris in 1880 at the age of 61. His cause of death was certified as heart failure brought on by acute gout. He was given a state funeral; The Times wrote, "The crowd of distinguished men that accompanied him on his last journey amid the general sympathy of the public shows that the late composer was reckoned among the masters of his art." He is buried in the Montmartre Cemetery.

All content from Kiddle encyclopedia articles (including the article images and facts) can be freely used under Attribution-ShareAlike license, unless stated otherwise. Cite this article:
Jacques Offenbach Facts for Kids. Kiddle Encyclopedia.