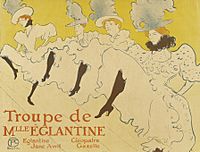 The can-can (also spelled cancan or Can Can) is a music hall dance, performed by a chorus line of female dancers who wear costumes with long skirts, petticoats, and black stockings, like the fashions of the 1890s. The can-can was first danced in low class ballrooms of Montparnasse in Paris about 1830. The dancers of the 1890s, such as La Goulue and Jane Avril, were highly paid for their appearances at the Moulin Rouge and elsewhere. The female dancers of the French Second Empire and the fin de siècle developed the various cancan moves.

The Galop from Jacques Offenbach's Orpheus in the Underworld is the tune most often played with the can-can.

All content from Kiddle encyclopedia articles (including the article images and facts) can be freely used under Attribution-ShareAlike license, unless stated otherwise. Cite this article:
Can-can Facts for Kids. Kiddle Encyclopedia.