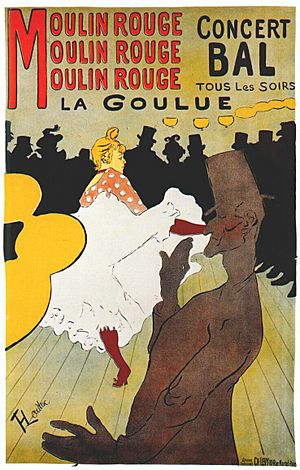 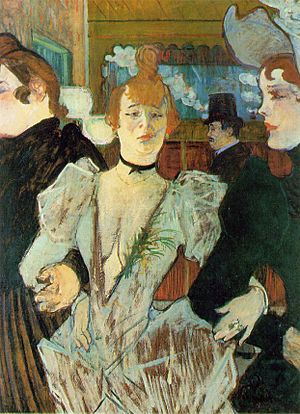 La Goulue was Louise Weber (13 July 1866, Clichy, Paris – 30 January 1929), a French can-can dancer. She was always known by her nickname. La Goulue is French slang for 'greedy guts'. It came from her habit of picking up a customer's glass and drinking it while dancing past the table.

Growing up, Weber was a poor Jewish girl who loved to dance. She would dressed up and pretended to be a glamorous star on a great stage. At 16, she was working with her mother in the laundry. Without her mother knowing, she began sneaking off to a dance hall wearing a dress she would "borrow" from one of their customers.

Weber quickly became popular because of her dancing at small clubs in Paris.

Later, she met the Montmartre painter Pierre-Auguste Renoir. He introduced her to a group of models who earned money posing for artists and photographers.

All content from Kiddle encyclopedia articles (including the article images and facts) can be freely used under Attribution-ShareAlike license, unless stated otherwise. Cite this article:
La Goulue Facts for Kids. Kiddle Encyclopedia.