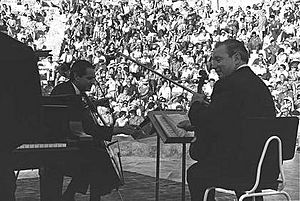 A piano trio is a group of three instruments including a piano. Usually it is a piano, a violin and a cello. This combination of instruments has been a very popular form of chamber music from the Classical music period onwards. A piano trio can also mean a piece of music written for a piano trio to play.

Music for three people to play at one piano is called music for piano six hands.

Haydn, Mozart and Beethoven all wrote several piano trios for the traditional combination of piano, violin and cello. Beethoven’s last piano trio has the nickname Archduke because it was written for the Archduke Rudolph. Franz Schubert wrote two beautiful piano trios.

In the Romantic period some of the best piano trios were written by Felix Mendelssohn, Antonín Dvořák, César Franck and Pyotr Tchaikovsky.

In the 20th century Maurice Ravel and Dmitri Shostakovich each wrote a famous piano trio.

Alfred Cortot, Jacques Thibaud and Pablo Casals were world famous musicians who played and recorded piano trios in the early 20th century. During the second half of the 20th century the Beaux Arts Trio were the best known group. Today there are many young musicians who play piano trios, including three Japanese sisters called the Fujita Piano Trio who play a lot of their music all from memory.

All content from Kiddle encyclopedia articles (including the article images and facts) can be freely used under Attribution-ShareAlike license, unless stated otherwise. Cite this article:
Piano trio Facts for Kids. Kiddle Encyclopedia.