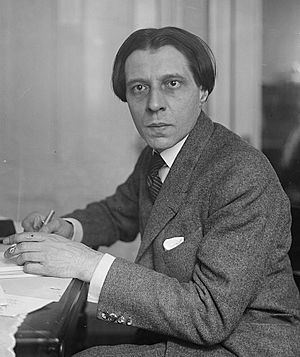 Alfred Denis Cortot (born Nyon, 26 September 1877; died Lausanne, 15 June 1962) was a French-Swiss pianist and conductor. He is one of the most famous 20th century musicians. He was especially known for his playing of piano music by 19th century Romantic composers such as Chopin and Schumann. He formed a piano trio with the violinist Jacques Thibaud and the cellist Pablo Casals. He was a piano teacher and conductor.

Cortot (pronounce “Cor-toe”) was born in Nyon in the French-speaking part of Switzerland. His father was French and his mother was Swiss. Cortot studied at the Paris Conservatoire. His teachers were Emile Descombes and Louis Diémer. He won a first prize (premier prix) in 1896. His first public concert was at the Concerts Colonne in 1897 when he played Beethoven's Piano Concerto No. 3. He helped opera singers to learn their music, and became assistant conductor at the Bayreuth Festival. In 1902 he conducted Wagner’s Götterdämmerung. It was the first time it had been performed in Paris. He formed a concert society to perform Wagner's Parsifal, Beethoven's Missa solemnis, Brahms' German Requiem, and new works by French composers.

In 1905, Cortot formed a trio with Jacques Thibaud and Pablo Casals, which became the most famous piano trio of the time. There are still several recordings of their playing. From 1907 to 1923, Cortot taught at the Paris Conservatoire, where his pupils included Clara Haskil, Dinu Lipatti, Vlado Perlemuter. In 1919, he founded the École Normale de Musique de Paris. Many people came to hear him teach about how to perform piano music. He travelled a lot and also conducted famous orchestras. He died in Lausanne.

Many people did not agree with him when he supported the German occupation of France during the Second World War. He played in some concerts which were supported by the Nazis. He may just have played at these concerts because he liked German music, but it made him some enemies. His wife, Clothilde Breal, was of Jewish origin and her cousin, Lise Bloch, was married to Leon Blum, the first Jew to become President du Conseil or Prime Minister in France. Cortot and the Blums were good friends, although he was banned for a year from performing in France.

He was famous for playing the piano music of Chopin and Schumann, Cortot made editions of both those composers' music. He had a superb technique, but he also had many memory lapses in concerts and occasionally left wrong notes on his records. Nevertheless, when he played well he was one of the greatest pianists of his time.

All content from Kiddle encyclopedia articles (including the article images and facts) can be freely used under Attribution-ShareAlike license, unless stated otherwise. Cite this article:
Alfred Cortot Facts for Kids. Kiddle Encyclopedia.