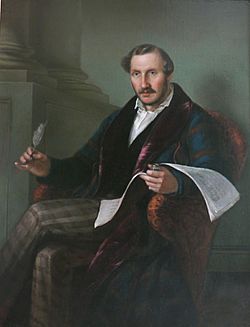 Gaetano Donizetti (born Bergamo 29 November 1797; died Bergamo 8 April 1848) was an Italian composer. He was the most famous composer of operas in Italy in the years between the death of Bellini (1835) and the time when Verdi was becoming well-known. Bellini and Donizetti wrote operas in the bel canto style: music with beautiful, smooth melodies.

Donizetti’s family were very poor. His talent was discovered by Simon Mayr who was maestro di cappella (music director) at S Maria Maggiore in Bergamo. He opened a school which trained boys to sing in the church choir and gave them a good musical education. Donizetti learned a lot from Mayr and was always very grateful to him.

Donizetti’s first operas were performed in Venice. A rich lady who realized he was very talented paid so that he did not have to do military service. His opera Zoraida di Granata was very successful in Rome and he was given a contract for an opera for Naples. For several years he composed between two and five operas every year. They were not particularly successful. One of the reasons was that the libretti he was given (the words he had to set) were not very good.

In 1828 he married. None of their three children lived very long and his wife died in 1837 which made him very sad during his last years. This can be felt in his music.

His opera Anna Bolena made him internationally famous. It was performed in London and Paris. His opera Maria Stuarda was based on a play by Schiller. It was not popular at first. The audience did not like the tragic ending. Today it is recognized as containing some great music, especially in the final scene. After a visit to Paris he returned to Naples to produce Lucia di Lammermoor which was based on Scott’s novel The Bride of Lammermoor. There is a French version as well as an Italian version of this opera.

In 1838 he moved to Paris where he had his operas performed in four theatres. Berlioz wrote very critical articles about him in a music journal. Donizetti had gone to Paris hoping that he would earn lots of money so that he could then retire, just like Rossini had done. However, his health was not good and he found it harder to concentrate. He managed to composed Don Pasquale which is one of the best comic operas every written, but it does have a lot of music that he had written earlier. He was obviously finding it difficult to think of new ideas. Soon he became really ill. He was put in a sanatorium near Paris for 17 months. In 1847 some friends arranged for him to stay with them, but he was very ill by then. He was paralysed and almost unable to speak. His friends looked after him until he died.

He was buried in Bergamo. His remains are now in a church there. The house where he was born is a museum.

All content from Kiddle encyclopedia articles (including the article images and facts) can be freely used under Attribution-ShareAlike license, unless stated otherwise. Cite this article:
Gaetano Donizetti Facts for Kids. Kiddle Encyclopedia.