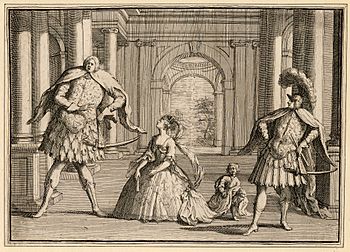 A caricature of a performance of Handel's Flavio, with three of the most well-known opera seria singers of their day: the castrato Senesino on the left, Francesca Cuzzoni in the centre, and the castrato Gaetano Berenstadt on the right. 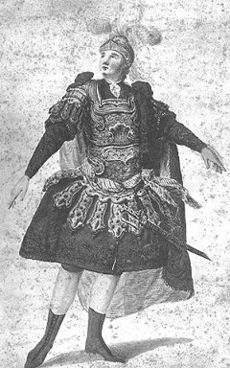 Opera seria is an Italian term which refers to the "serious" style of Italian opera in the 18th century. It was different from opera buffa which was a musical comedy. Opera seria was supposed to be about serious tragedy. The term “opera seria” only started to be used after the time when it was popular in order to talk about the historic period.

Italian opera seria was always in the Italian language, even when it was composed or performed in other countries such as Germany, Austria, England and Spain. In France the opera seria was not so popular. They had their own forms of opera.

Opera seria was often called dramma per musica ("drama through music"). The story was told in recitative, a quick-flowing music with simple accompaniment. Then there were arias which were the big songs where the singers could show off their skills. They were normally in da capo form (a main section, a middle section, and the main section repeated). The opera would start with an overture and there would also be some ensembles where several characters sung at once.

The stories of opera seria were usually about the ancient Greek and Roman gods or kings. This was different to opera buffa which was about ordinary people, and which often made fun of kings and nobility.

The main singers in opera seria were mostly castrati. Gradually during the 18th century the female singers got more of the main roles (the “prima donna” or “first lady”).

One of the first composers of opera seria was Alessandro Scarlatti. In England George Frideric Handel wrote many great opera seria. The most important man in the development of mid-18th century opera seria was Metastasio who wrote libretti. His words were set by the greatest composers in Europe: Hasse, Porpora and, especially, Mozart.

In the later part of the 18th century Christoph Willibald Gluck changed a lot of traditions in opera. He did not want opera to be just a way for singers to show off their voices. He wanted the story to be important. He did not use dry recitative but tried to make the drama, dance and music all important, especially the chorus. Orfeo ed Euridice was his first important opera, followed by others such as Alceste.

Wolfgang Amadeus Mozart was influenced by Gluck’s reforms. His two great opera seria were Idomeneo (1780) and La clemenza di Tito (1791). Mostly, however, Mozart was not so interested in writing about the old Greek gods and kings. His other great Italian operas: Cosi fan tutte, Le Nozze di Figaro and Don Giovanni are something between opera seria and opera buffa. These were set to libretti by Lorenzo da Ponte.

Other important opera seria composers were Luigi Cherubini and Gaspare Spontini, followed by Rossini whose musical style made further changes to opera seria.

All content from Kiddle encyclopedia articles (including the article images and facts) can be freely used under Attribution-ShareAlike license, unless stated otherwise. Cite this article:
Opera seria Facts for Kids. Kiddle Encyclopedia.