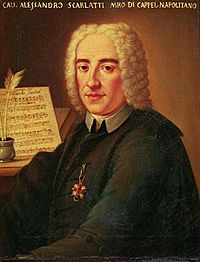 Alessandro Scarlatti (born Palermo, 2 May 1660; died 24 October 1725) was an Italian composer. He lived in the Baroque period. He is especially famous for his operas and chamber cantatas. He is thought of as the founder of the Neapolitan school of opera. He was the father of the famous composer Domenico Scarlatti.

Scarlatti was born in Palermo. At that time it was part of the Kingdom of Sicily. We know nothing about his musical education. When his opera Gli Equivoci nell sembiante was produced in Rome in 1679 the Queen of Sweden, who was living in Rome at the time, was very impressed and gave him the job of being her Maestro di cappella. In February 1684 he became Maestro di Cappella to the viceroy of Naples. He wrote many operas for him, as well as some music for important state occasions.

In 1702 Scarlatti left Naples and went to Florence where he composed operas for Ferdinando de' Medici and for Cardinal Ottoboni, who made him his maestro di cappella. In 1703 he also got a similar job in Rome at the Basilica di Santa Maria Maggiore.

After visiting Venice and Urbino in 1707, Scarlatti went back to Naples in 1708, and stayed there until 1717. However, the audiences in Naples no longer seemed interested in his music. They liked their serious operas to include comic music. Some of his best operas were written for Rome where they were produced at the Teatro Capranica. He also wrote some church music and music for royal weddings. He died in Naples.

Scarlatti's music forms an important link between the early Baroque Italian vocal styles of the 17th century and the classical period of the 18th century, which led to the music of Haydn and Mozart.

Perhaps his greatest work is Mitridate Eupatore. Many of his later operas are full of music which allows the singers to show off. In his opera Teodora (1697) he was the first composer to use the orchestral ritornello (a tune which keeps coming back after sections of solo singing).

Some of his later operas written for Rome make the orchestra sound much more modern. He uses horns in the orchestra. This was a new idea.

As well as operas, Scarlatti composed at least five hundred chamber-cantatas. These are works for solo voice accompanied by orchestra. Hardly any of them were published, but they contain a lot of good music.

He also wrote masses including the St Cecilia Mass (1721).

All content from Kiddle encyclopedia articles (including the article images and facts) can be freely used under Attribution-ShareAlike license, unless stated otherwise. Cite this article:
Alessandro Scarlatti Facts for Kids. Kiddle Encyclopedia.