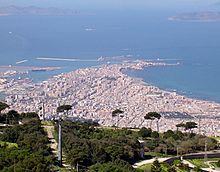 Trapani (Sicilian: Tràpani; Latin: Drepanon; Greek: Δρέπανον) is a city in western Sicily. It is the capital of the Province of Trapani. The city has population of around 69,000 people.

The city was founded by the Elymians. It was created to serve as a port for the nearby city, Erice. The city was first called Drépanon (from the Greek word for sickle). Carthage captured the city in 260 BC, and made it an important naval base. The city was then captured by the Roman Republic after the Battle of the Aegates. The area would later be captured by the Vandals, Ostrogoths, Byzantine Empire, Arabs and the Normans.

The city was damaged from World War II.

Trapani is known for its Easter-related traditions. These traditions date back to at least 1612. The city also features the longest religious festival in Sicily and in Italy.

All content from Kiddle encyclopedia articles (including the article images and facts) can be freely used under Attribution-ShareAlike license, unless stated otherwise. Cite this article:
Trapani Facts for Kids. Kiddle Encyclopedia.