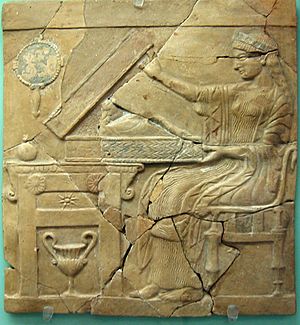 Persephone was a Greek goddess of grain and spring. Also sometimes referred to as Kore. A daughter of Zeus and Demeter. She was kidnapped by Hades and he makes her eat a pomegranate, a fruit of the underworld. According to some myths, if one were to eat the fruit of the Underworld, they would be forced to stay there. This myth explains why the seasons change. Supposedly, Demeter was so sad over the disappearance of her daughter that she ignored her duties to the world, during this time all plants died. When Demeter went to the Underworld to rescue her Persephone, Hades forced Persephone to eat the pomegranate. After she ate this fruit it was supposed to keep her in the underworld with Hades so she would be forced to marry him. In some versions she only ate 6 seeds from the pomegranate, so Hades only made her stay 6 months of the year. It is during the 6 months that Persephone is with Hades that Demeter weeps, causing all plant life to die (symbolizing Fall and Winter), and during the six months that she is with Demeter life is sustained (Spring and Summer). She does not have a throne on Olympus but her mother let her sit on her lap when Persephone was a child. The only reason Hades kidnapped her is because he saw her running in a field, and he thought she was beautiful.

All content from Kiddle encyclopedia articles (including the article images and facts) can be freely used under Attribution-ShareAlike license, unless stated otherwise. Cite this article:
Persephone Facts for Kids. Kiddle Encyclopedia.