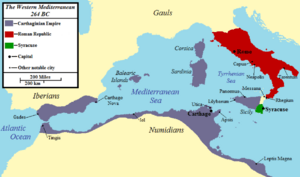 The First Punic War started in 264 BC. It lasted for 23 years, ending in 241 BC. It was the first of three wars fought between ancient Carthage and the Roman Republic. They were rivals for trade and influence in the Mediterranean. For more than 20 years the two powers struggled for supremacy. Key areas were the island of Sicily and its surrounding waters, and also North Africa. Rome eventually won control of Sicily.

With the help of her own allies and rebels among the indigenous African allies of Carthage, Rome won the First Punic War after 23 years. In the end it became the dominant naval power of the Mediterranean. To get terms for peace, the Carthaginians had to pay a large amount of money (in silver), and give up a number of islands in the Mediterranean. They kept Sardinia and Corsica.

All content from Kiddle encyclopedia articles (including the article images and facts) can be freely used under Attribution-ShareAlike license, unless stated otherwise. Cite this article:
First Punic War Facts for Kids. Kiddle Encyclopedia.