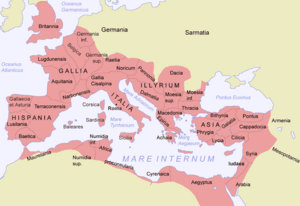 Map of Roman provinces after AD 120

In Ancient Rome, a province (Latin, provincia, pl. provinciae) was the basic and, until around 300, largest territorial and administrative unit of the empire's territorial possessions outside of the peninsula of Italy. The word province in modern English came from the term used by the Romans.

All content from Kiddle encyclopedia articles (including the article images and facts) can be freely used under Attribution-ShareAlike license, unless stated otherwise. Cite this article:
Roman province Facts for Kids. Kiddle Encyclopedia.