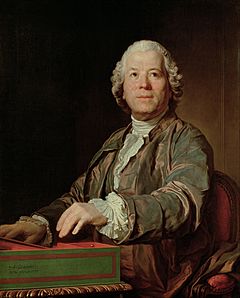 Christoph Willibald Ritter von Gluck (b.Erasbach nr. Berching, July 2, 1714; d.Vienna, November 15, 1787) was a German composer. He is famous for his operas which were written in a new and exciting way. He was not interested in writing operas which were just a series of songs for singers to show off. He wanted to make his operas into good pieces of drama. His operas had a big influence on later composers like Mozart, Weber and Wagner. He wrote Italian operas and French operas. Orfeo ed Euridice includes song “Che farò senza Euridice” which is one of the best-known opera songs ever written.

All content from Kiddle encyclopedia articles (including the article images and facts) can be freely used under Attribution-ShareAlike license, unless stated otherwise. Cite this article:
Christoph Willibald von Gluck Facts for Kids. Kiddle Encyclopedia.