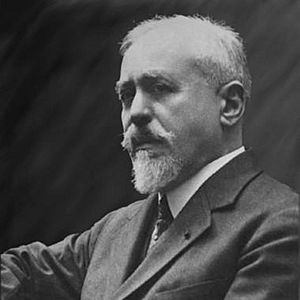 Paul Dukas was born in Paris to a Jewish father and Catholic mother. He was taught music by Théodore Dubois and Ernest Guiraud at the Conservatoire de Paris, where he became friends with the composer Claude Debussy. He then worked as a music critic and orchestrator.

Although Dukas wrote a lot of music, he destroyed many of his pieces because he was unhappy with them. Only a few are left. His first important surviving work is the Symphony in C (1896). This is in the style of Beethoven and César Franck. Like Franck's only symphony, Dukas' is in three movements not the usual four: Allegro non troppo, ma con fuoco; Andante espressive e fuoco; Allegro spiritoso.

Paul Dukas and students of his composition class at the Paris Conservatoire, 1929.

For the piano, Dukas wrote two complex and difficult works, a Sonata in E-flat minor (1901) and Variations, interlude and finale on a theme of Rameau (1902), again in the style of Beethoven and Franck. The Sonata has not been performed very often, but lately pianists, such as Marc-André Hamelin, have started to add it to their concerts. There are also two smaller works for piano solo.

The opera Ariane et Barbe-Bleue ("Ariadne and Bluebeard"), which he wrote between 1899 and 1907, has often been compared to Debussy's Pelléas et Mélisande. This is because it is similar in its musical style, and both operas are based on words by Maurice Maeterlinck. Dukas's last big work was the grand oriental ballet La Péri (1912). This is about a man who goes to the Ends of the Earth to find immortality, and finds a mythical Peri, holding The Flower of Immortality.

Because the opening of the ballet is very quiet, Dukas later added a short 'Fanfare pour preceder La Peri' which gave the usually noisy audiences time to settle in their seats before the main opera began.

All content from Kiddle encyclopedia articles (including the article images and facts) can be freely used under Attribution-ShareAlike license, unless stated otherwise. Cite this article:
Paul Dukas Facts for Kids. Kiddle Encyclopedia.