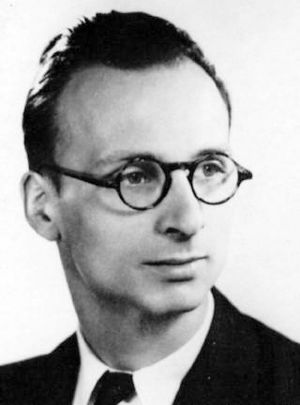 Jehan Alain (born Saint-Germain-en-Laye, Paris, 3 February, 1911; died near Saumur, 20 June 1940) was a French organist and composer. He learned to play the organ at home on an organ that his father had built. In his short life he composed many works. His most famous organ pieces are Trois Danses (Three Dances) and a brilliant piece called Litanies.

Alain was killed fighting in the World War II.

His youngest sister, Marie-Claire Alain, is an internationally-famous organist and has made several complete recordings of her brother's organ works.

All content from Kiddle encyclopedia articles (including the article images and facts) can be freely used under Attribution-ShareAlike license, unless stated otherwise. Cite this article:
Jehan Alain Facts for Kids. Kiddle Encyclopedia.