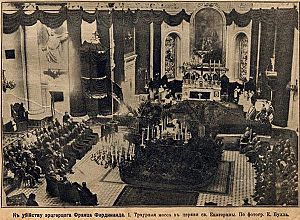 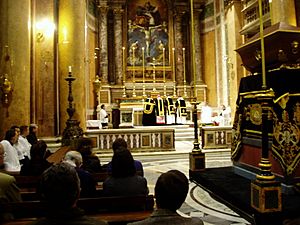 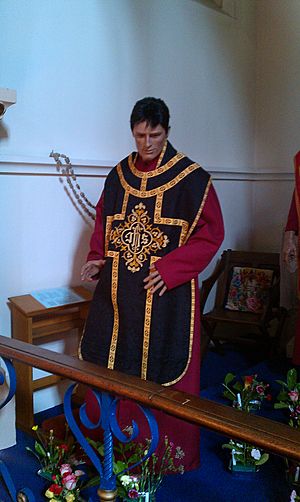 A Requiem (or Requiem Mass) is a eucharist service in the Roman Catholic church to remember someone who has died. There are special words for a requiem mass. They are in Latin. The best-known part of the requiem mass starts with the words “Requiem aeternam dona eis, Domine” (“Give them eternal rest, O Lord”). This is why it is called a “requiem”.

Many composers throughout the centuries have composed music to these words. The word “requiem” can mean a piece of music which sets the words of the requiem mass.

Celebration of the eucharist in honour of people who have died goes back at least as far as the 2nd century.

In the Middle Ages the words of the requiem mass were sung to Gregorian chant.

In the Renaissance church music was generally polyphonic. This sort of music, which has several voices weaving in and out of one another, is the kind of music used at the time for requiems. The composer Johannes Ockeghem is an example of a composer who wrote such music.

Polyphonic settings of the requiem continued during the Baroque period (17th and early 18th centuries), even although other musical forms (e.g. opera) had developed a much more modern style.

The most famous Requiem from the 18th century is the one by Mozart. Many musicians think it was one of the greatest pieces of music ever written. It was left unfinished when Mozart died.

In the 19th century many composers wrote requiems. Most of these were written for performance at concerts, not for church services, but they still used the Latin words of the Roman Catholic requiem mass.

Luigi Cherubini wrote a Requiem in C minor for the annual remembering of the execution of Louis XVI. He wrote another Requiem in D minor, which he wrote for himself. It was performed at his own funeral.

Brahms wrote a work which he called Ein Deutsches Requiem (A German Requiem). It is unusual because, instead of setting the traditional Latin words, he took some words from the German translation of the Bible.

In 1888 Gabriel Fauré wrote a requiem which uses an orchestra without violins except for a solo violin in the movement called “Sanctus”. In 1900 he made some changes and added an important baritone solo.

In the 20th century many composers continued to write requiems. The most famous one is Britten’s War Requiem (1961). The message of this work is that war is cruel and pointless. Britten uses the Latin words of the requiem mass, but also some English poems by Wilfred Owen who was killed in the First World War. The baritone and tenor soloists who sing these English words represent the German and the English soldiers. The work was written for Coventry cathedral which had been rebuilt after the old cathedral had been totally destroyed in World War II.

Different parts of a Requiem

For example Mozart's Requiem follows this. In his requiem, the Lux aeterna (written by someone else) is the same as the Introitus, with different words.

This sequence was fixed by the Council of Trent in the 16th century. It was slightly modified in the Second Vatican Council,

All content from Kiddle encyclopedia articles (including the article images and facts) can be freely used under Attribution-ShareAlike license, unless stated otherwise. Cite this article:
Requiem Facts for Kids. Kiddle Encyclopedia.