Johannes Ockeghem (also Jean de, Jan; surname Okeghem, Ogkegum, Okchem, Hocquegam, Ockegham; other variant spellings are also encountered) (1410/1425 – February 6, 1497) was the most famous composer of the Franco-Flemish School in the last half of the 15th century, and is often considered the most influential composer between Guillaume Dufay and Josquin des Prez. In addition to being a renowned composer, he was also an honored singer, choirmaster, and teacher. 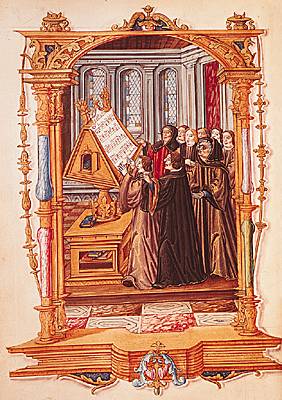 Johannes Ockeghem in a painting from 16th century

The name Ockeghem is found with many different spellings in old documents. He was almost certainly born in the town of Saint-Ghislain. His native language was probably French.

Like many composers in this period, he started to learn about music by singing in a church choir, quite possibly in Saint-Ghislain and then in Mons.

His first important job was working for Charles I, Duke of Bourbon in Moulins, (France). Then in 1451 he went to work for King Charles VII of France. By this time he was well known as a singer and composer. He worked for the royal court for more than 50 years and was rewarded with promotions and honours.

Charles VII gave him important jobs. After Charles VII’s death Louis XI became king. He reigned for a long time and Ockeghem was in favor with the king. He often travelled with the king, visiting places such as Cambrai and even as far as Spain. He met famous people including the composers Dufay and Binchois. He also had other jobs in Paris.

Louis XI died in 1483. We do not kinow much about where Ockeghem went after that, but he probably died in Tours because that is where he left his will.

All content from Kiddle encyclopedia articles (including the article images and facts) can be freely used under Attribution-ShareAlike license, unless stated otherwise. Cite this article:
Johannes Ockeghem Facts for Kids. Kiddle Encyclopedia.