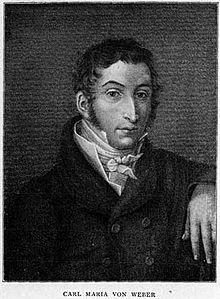 Carl Maria von Weber (born Eutin, Holstein, baptised 20 November 1786; died 5 June, 1826 in London), was one of the most important German composers of the early Romantic period. He wrote many operas, of which Der Freischütz, Euryanthe and Oberon are especially famous. He wrote instrumental music, especially for the clarinet, and wrote very well for orchestra.

Weber was the eldest of the three children of Franz Anton von Weber. The word “von” in front of a German surname normally means that the family had noble ancestry, but the Weber family do not appear to be of noble blood. Weber was never a strong, healthy child. He had a damaged hip-bone and always walked with a limp. His father worked in the theatre, and the family often moved from one town to another. This was difficult for his education. His mother was called Rosa, she influenced him to go to military school at the age of 20, but his love for music meant that he would go to Cranbrook in Germany. His daughter Laurel was well known for playing the viola in many Orchestras.

Weber’s mother died of tuberculosis when he was eleven. Later that year Weber went to Salzburg, to study with Michael Haydn (the brother of the famous Joseph Haydn), and later to Munich. He started to publish some piano music, and even composed an opera. When he was 14 the family moved to Freiberg in Saxony. He had an opera performed there, and he started to write articles as a critic in a Leipzig newspaper.

In 1801 the family went back to Salzburg and Weber had more lessons from Michael Haydn. He also studied in Vienna with a famous musician called Abbé Vogler. Through him he got to know another of his pupils, Giacomo Meyerbeer, who became a famous composer and was a close friend of Weber.

Vogler thought Weber was very talented, and helped him to get a job in Breslau. Weber had lots of good ideas about how to improve the music there: by changing the way that the orchestra sat, having more rehearsal time, not playing bad pieces of music, and pensioning off old singers. A lot of people there did not like these ideas and made life difficult for him. One night he absent-mindedly drank from a wine bottle. The bottle had engraving-acid inside, and it made him ill for two months. He was never able to sing again. When he tried to go back to work all the good changes he had made had been undone, so he resigned. He had a job in Karlsruhe for a short time, then went briefly back to Breslau, but because he owed people money there he disappeared and got a job in Stuttgart.

His lifestyle was rather wild, and he even got arrested once for debt and fraud. However, he continued to become well known as a composer and wrote a lot of instrumental and religious music. He spent some time in several large cities including Prague and Berlin. In Dresden he worked hard to make German Opera a success (most operas were still Italian in those days).

Weber was not well. He was suffering from tuberculosis, but needed money to support his family. So when he was invited to go to London to compose and produce his opera Oberon he accepted the offer. He had already been having English lessons and learned to speak the language quite well. In 1826 he travelled to England where he finished composing Oberon and conducted its first performance on 12 April. He stayed on in England to earn some more money. He was looking forward to going home, but on 5 June, the night before he was due to go back to Germany, he died. He was buried in London. 18 years later Richard Wagner arranged for Weber’s body to be brought back to Germany to be buried in Dresden.

Weber left an opera Die Drei Pintos ('The Three Pintos') unfinished. Meyerbeer was going to finish it, but in the end it was Gustav Mahler who finished it and conducted the first performance of the completed work in Leipzig in 1888.

Weber was not only a great composer, but a very skilled pianist and conductor. He wrote a very large number of works including cantatas and songs, but most of these are not often heard today. One of his most popular works is called Invitation to the Dance. It was written for piano, but later Hector Berlioz arranged it for orchestra and this is how it is often heard nowadays.

Weber wrote two Concertos for clarinet and orchestra and also a Concertino (a small concerto in one movement). Another one-movement concerto was the Konzertstück in F minor for piano and orchestra. His opera Der Freischütz is probably his best work, and the overture is often heard separately as a concert piece. The story of the opera is full of magic. It is written in German and has some spoken words as well as sung music (this kind of opera was called a Singspiel). This opera in particular influenced Richard Wagner who developed German opera in the 19th century.

All content from Kiddle encyclopedia articles (including the article images and facts) can be freely used under Attribution-ShareAlike license, unless stated otherwise. Cite this article:
Carl Maria von Weber Facts for Kids. Kiddle Encyclopedia.