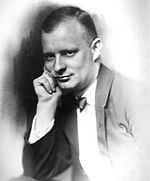 Paul Hindemith (pronounce: POWL HIN-de-mit), (born Hanau nr. Frankfurt am Main, 16 November 1895; died Frankfurt am Main, 28 December 1963) was a German composer, violist, teacher, music theorist and conductor. He was the most important and influential German composer during the years between the two World Wars. His style was at first influenced by Schoenberg and Expressionism, but gradually it became more neo-classical, and he turned against Schoenberg's whole approach. He was also famous as a viola player and composed a concerto for viola and orchestra.

All content from Kiddle encyclopedia articles (including the article images and facts) can be freely used under Attribution-ShareAlike license, unless stated otherwise. Cite this article:
Paul Hindemith Facts for Kids. Kiddle Encyclopedia.