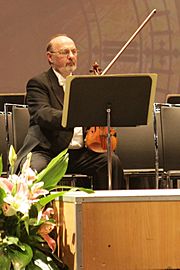 Lazar Shuster, Concertmaster of the Israel Philharmonic Orchestra in 2012.

The Concertmaster (from the German Konzertmeister) is the second-most significant person in an orchestra, symphonic band or other musical ensemble after the conductor or director. Another common term in the U.S. is "First Chair." In the U.K., the term commonly used is "leader."

In an orchestra, the concertmaster is the leader of the first violin section. There is another violin section, the second violins, led by the principal second violin. Any violin solo in an orchestral work is played by the concertmaster (except in the case of a concerto, in which case a guest soloist usually plays). It is usually required that the concertmaster be the most skilled musician in the section, experienced at learning music quickly, counting rests accurately and leading the rest of the string section by his or her playing and bow gestures.

The concertmaster sits to the conductor's left, closest to the audience, in what is called the "first chair," "first [music] stand" or "first desk" (in the UK or sometimes elsewhere). (In one instance, Ferdinand David had been concertmaster of the Leipzig Gewandhaus Orchestra since Felix Mendelssohn became conductor in 1835. In 1847 Joseph Joachim joined David on the first desk.) The concertmaster makes decisions regarding bowing and other technical details of violin playing for the violins, and sometimes all of the string players. He or she leads the orchestra in tuning before concerts and rehearsals, and other technical aspects of orchestra management. Leading the orchestral tuning is not just a mere formality; if the concertmaster believes that a section is not adequately tuned, he or she will signal to the oboe player to play another "A." Several larger orchestras have one or more assistant concertmasters, who lead the orchestra in the concertmaster's absence.

The concertmaster, along with the conductor and section principals, will normally participate in the auditions of important musicians (e.g., principal players) in the orchestra.

The concertmaster in a standard concert band is the principal clarinet, oboe, flute or saxophone and leads the ensemble's tuning. The first-chair clarinet concertmaster will, in common practice, play all solos for their instrument. Often the lead flutist will receive similar responsibilities to the clarinet concertmaster, depending on several factors such as age, skill and time spent in the ensemble. The concertmaster will, in both orchestral and wind band settings, also coordinate with other principals and section leaders, in most cases being their senior in terms of group pecking order.

In brass bands, the role of concertmaster is often filled by the principal solo cornet or trumpet.

The duties and tasks of the concertmaster are myriad. Primarily, he or she acts as the conduit between conductor and orchestra and is accountable to both parties.

One of the principal tasks of the concertmaster is to provide bowings for the 1st violins prior to rehearsal. This entails a great knowledge of historical playing styles in addition to complete idiomatic understanding of the mechanics of string playing. Section leaders among the other strings will base their bowings on those of the concertmaster and these section leaders (called principals) may confer during rehearsal in order to ensure unity and cohesion of execution between the string sections. Ensemble cohesion emanates directly from the contact and connection between these vital front desk positions. The concertmaster assumes responsibility for the tone and execution of the entire section of 1st violins, in addition to performing any solo passages that occur in a given piece.

All content from Kiddle encyclopedia articles (including the article images and facts) can be freely used under Attribution-ShareAlike license, unless stated otherwise. Cite this article:
Concertmaster Facts for Kids. Kiddle Encyclopedia.