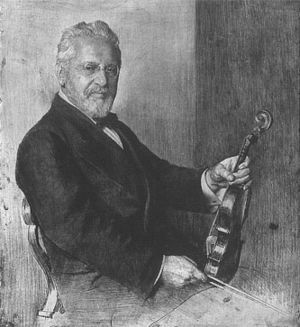 Arnold Rosé was born in Iaşi (Jassy) in what is now Romania. His family was Jewish. Their name at that time was Rosenblum. He had three brothers. All four boys were musical and so his parents decided to move to Vienna which was a big city in Austria where there was lots of music. Arnold’s father was a carriage builder. In those days people often travelled by horse and cart. His father made good quality carriages and he made plenty of money from his business.

When Arnold was seven he started music lessons. When he was ten he was good enough to study the violin at the Vienna Conservatorium which was a special school for musical pupils.

In 1881 he played a violin solo with a famous orchestra and famous conductor: the Vienna Philharmonic under Hans Richter. The piece he played was the Violin Concerto by Otto Goldmark. Soon he was offered the job of orchestral leader. This was a very important position for such a young man. He stayed in that job for 50 years!

Rosé did other things as well as playing with the orchestra. He gave violin lessons to talented pupils. He like to play string quartets and he got together with three other players to make up the Rosé Quartet. They were very good and for more than half a century people said they were the best string quartet in Europe. Arnold’s brother Eduard was the cellist in the quartet. They played works by lots of composers, especially Haydn, Mozart and Ludwig van Beethoven. Rosé knew the composer Johannes Brahms and they played some of Brahms’s compositions when they had only just been written, e.g. the clarinet quintet (for clarinet and string quartet). The Rosé Quartet also knew the composer Schoenberg and helped him to get well known by playing his music.

Another composer Rosé knew very well was Gustav Mahler. Mahler had two sisters. Arnold Rosé married one of them, and his brother Eduard married the other.

Arnold was kept very busy at his job as leader of the orchestra. The orchestra played in the concert hall as well as for the opera. At one special concert lots of flowers and plants had been brought in to the concert hall. The orchestra were busy playing when Arnold noticed people were looking at his shoes. He thought maybe he had an odd pair of shoes on. When he looked down at his feet he saw a mouse sitting there.

Arnold and his wife Justine had a son and a daughter who both became musicians. They had plenty of money to live quite comfortably. He was given the title of Royal and Imperial Court Musician, and he had a special court carriage to take him to the opera. He also had a carriage of his own with a footman in livery (uniform) to drive him about.

However, things changed in 1938. The Nazis took over Austria and made life very difficult for Jewish people. They were in great danger. In the autumn his wife died and Arnold had to save his life by going to England. He stayed there for most of his remaining years. He died in London.

All content from Kiddle encyclopedia articles (including the article images and facts) can be freely used under Attribution-ShareAlike license, unless stated otherwise. Cite this article:
Arnold Rosé Facts for Kids. Kiddle Encyclopedia.