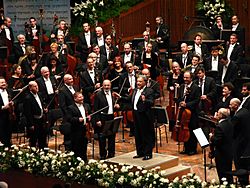 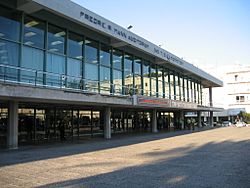 The Israel Philharmonic Orchestra in Tel Aviv is the most famous orchestra in Israel. It is usually called the Israel Philharmonic Orchestra, or abbreviated IPO. In Hebrew it is written: התזמורת הפילהרמונית הישראלית, pronounced: ha-Tizmoret ha-Filharmonit ha-Yisre'elit. It was started in 1936 by the violinist Bronisław Huberman when it was known as the Palestine Orchestra. At this time the Nazis were in power in Germany and Jews were being persecuted. Many European orchestras were getting rid of their Jewish musicians. The orchestra gave their first concert in Tel Aviv on 26 December 1936, and was conducted by Arturo Toscanini.

The orchestra tours to many parts of the world. In 1971 they visited Germany. Some of the world's greatest conductors have conducted the orchestra. Leonard Bernstein and Zubin Mehta in particular have had a close relationship with them. They did not have a main conductor until 1977 when Mehta was made Music Director.

The IPO have made many recordings with Mehta, and also with Bernstein.

After 1938 the orchestra have refused to play the music of Richard Wagner because he was anti-Jewish.

Until 1977 the orchestra had no Music Directors. The conductors most closely associated with the orchestra were called musical advisors.

All content from Kiddle encyclopedia articles (including the article images and facts) can be freely used under Attribution-ShareAlike license, unless stated otherwise. Cite this article:
Israel Philharmonic Orchestra Facts for Kids. Kiddle Encyclopedia.