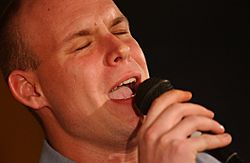 A singer performing a live audition in front of judges on TV for Fox’s American Idol reality television series.

An audition is a sample performance by an actor, singer, musician, dancer or other performer.

It typically involves the performer displaying their talent through a previously memorized and rehearsed solo piece or by performing a work or piece given to the performer at the audition or shortly before. In some cases, such as with a model or acrobat, the individual may be asked to demonstrate a range of professional skills. Actors may be asked to present a monologue. Singers will perform a song in a popular music context or an aria in a Classical context. A dancer will present a routine in a specific style, such as ballet, tap dance or hip-hop, or show his or her ability to quickly learn a choreographed dance piece.

The audition is a systematic process in which industry professionals select performers, which is similar to a job interview in the regular job market.

When people go for an audition they will normally have to prepare something to perform.

An actor many have to be prepared to say a monologue (a speech from a play). If he (or she) is auditioning for a particular play then he will take a scene from that play, e.g. if the play is Hamlet a male actor who would like the part of Hamlet might have prepared the famous "To be or not to be...." monologue. The director of the play will then be able to decide whether he is good enough, or whether he might be better in another role. They may give the person who is auditioning some other tests, e.g. improvisation or acting with other people.

When a musician auditions for a job in an orchestra they will have to prepare a piece of music they know well. They may also be expected to have prepared difficult passages from well-known musical works, e.g. someone auditioning for tuned percussion might be asked to play the xylophone introduction to Summer Time from Porgy and Bess, one of the hardest solos for xylophone. They will also be given some sightreading.

In some cases people who pass an audition are still not automatically a member of a group until they have performed with the group for a trial period.

All content from Kiddle encyclopedia articles (including the article images and facts) can be freely used under Attribution-ShareAlike license, unless stated otherwise. Cite this article:
Audition Facts for Kids. Kiddle Encyclopedia.