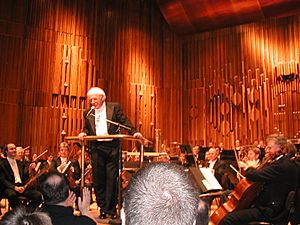 The London Symphony Orchestra (LSO) is one of the most famous orchestras of the world. They are based in London's Barbican Centre, but they often tour to lots of different countries.

The LSO started in 1904. Most of the players had been members of Henry Wood's Queen's Hall orchestra. They left that orchestra when Henry Wood made a rule that they were not allowed to send deputies to rehearsals or concerts. The LSO was set up as a self governing organization. This means that the players themselves organize everything: they decide how much they are going to be paid, who can be in the orchestra, etc.

The LSO gave its first concert on 9 June 1904 with Hans Richter conducting. He was principal (main) conductor until 1911, when Edward Elgar took over for a year. Some of the world's most famous conductors have conducted the orchestra. Since January 2007 Valery Gergiev has been the LSO's Principal Conductor. André Previn is the Conductor Laureate (Honorary conductor). In 2006, Daniel Harding became the co-principal guest conductor together with Michael Tilson Thomas. Richard Hickox is the Associate Guest Conductor of the LSO. The leader of the orchestra is Gordan Nikolitch.

In 1966 the London Symphony Chorus (LSC) was formed to join the LSO for works with choirs.

For many years the LSO refused to allow women to become members because they thought the sound would not be so good.

The LSO made their first gramophone recording in 1920. Since then they have made a very large number of recordings. 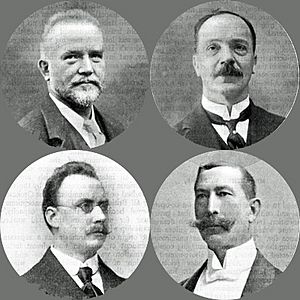 All content from Kiddle encyclopedia articles (including the article images and facts) can be freely used under Attribution-ShareAlike license, unless stated otherwise. Cite this article:
London Symphony Orchestra Facts for Kids. Kiddle Encyclopedia.