Jerrald King "Jerry" Goldsmith (February 10, 1929 – July 21, 2004) was an American composer and conductor most known for his work in film and television music scores. He composed for such films as Star Trek: The Motion Picture and four other films within the Star Trek franchise, Logan's Run, Planet of the Apes, Patton, Chinatown, The Omen, Alien, Outland, Gremlins, Total Recall, Air Force One, L.A. Confidential, Mulan, The Mummy, three Rambo films and Explorers. He collaborated with some of film history's most accomplished directors. He has often been considered one of film music history's most innovative and influential composers. 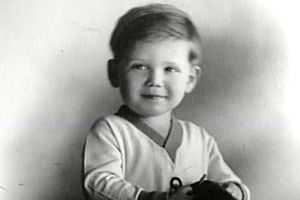 Jerry Goldsmith as a child

Goldsmith, was born in Los Angeles, California. He started playing piano at age six, but only "got serious" by the time he was eleven. At age thirteen, he studied piano privately with legendary concert pianist and educator Jakob Gimpel and by the age of sixteen he was studying both theory and counterpoint under Italian composer Mario Castelnuovo-Tedesco.

At age sixteen, Goldsmith saw the 1945 film Spellbound in theaters and was inspired by veteran composer Miklós Rózsa's soundtrack to pursue a career in music. Goldsmith later enrolled and attended the University of Southern California where he was able to attend courses by Rózsa, but dropped out in favor of a more "practical music program" at the Los Angeles City College. There he was able to coach singers, work as an assistant choral director, play piano accompaniment, and work as an assistant conductor.

On May 9, 2017, Goldsmith posthumously received a star on the Hollywood Walk of Fame for his achievements in the music industry, located at 6752 Hollywood Boulevard. 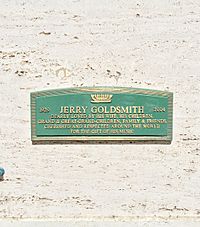 Goldsmith was married twice. He was first married to Sharon Hennagin in 1950; they divorced in 1970. He married Carol Heather in 1972, and the couple remained together until his death in 2004. His oldest son Joel Goldsmith (1957–2012) was also a composer and collaborated with his father on the score for Star Trek: First Contact.

Goldsmith died at his Beverly Hills home on July 21, 2004 at the age of 75. He was survived by his wife Carol and his children Aaron, Joel (who also died from cancer on April 29, 2012), Carrie, Ellen Edson, and Jennifer Grossman.

All content from Kiddle encyclopedia articles (including the article images and facts) can be freely used under Attribution-ShareAlike license, unless stated otherwise. Cite this article:
Jerry Goldsmith Facts for Kids. Kiddle Encyclopedia.