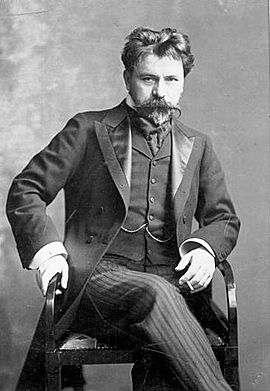 Arthur Nikisch (born Lébény Szent Miklós, Hungary, 12 October 1855; died Leipzig, 23 January 1922) was a Hungarian conductor. He conducted in Germany as well as internationally and was thought of as the greatest conductor of his time.

Arthur Nikisch was born in Hungary (then the Austro-Hungarian Empire). His father was from Moravia, his mother was Hungarian. As a child he showed exceptional musical talent. He learned the piano and the violin and studied at the Vienna Conservatory, where he won prizes for composition and for playing the violin and piano. He was playing the violin in the orchestra when Richard Wagner conducted a concert in Bayreuth to celebrate the beginning of the building of his new theatre: the Bayreuth Festspielhaus. He joined the Vienna Court Orchestra where he played in concerts that were conducted by famous composers such as Brahms, Liszt, Verdi and Wagner. Soon he started his career as conductor in Leipzig. He quickly became internationally famous. In 1889 he was invited to conduct the Boston Symphony Orchestra. He conducted many concerts in the USA. In 1893 he became conductor of the Budapest Opera. Two years later he also became conductor of the Leipzig Gewandhaus Orchestra, taking the place of Carl Reinecke. In the same year he also became the main conductor of the Berlin Philharmonic. He remained conductor of these two world famous orchestras until his death.

Nikisch gave concerts all over the world, appearing as guest conductor with great orchestras such as the Concertgebouw Orchestra in Amsterdam and the Vienna Philharmonic Orchestra. In 1912 he took the London Symphony Orchestra to the USA, the first European Orchestra to tour there (fortunately they cancelled their booking on the RMS Titanic at the last moment). He conducted at the Leipzig Opera and taught conducting at the Leipzig Conservatory.

Nikisch was famous for his conducting of the great Romantic composers such as Schumann, Brahms, Bruckner, Tchaikovsky and Wagner as well as Beethoven. He had a great influence on the next generation of conductors including Wilhelm Furtwängler and Sir Adrian Boult. He helped composers such as Mahler, Max Reger and Richard Strauss to become famous by performing their music.

All content from Kiddle encyclopedia articles (including the article images and facts) can be freely used under Attribution-ShareAlike license, unless stated otherwise. Cite this article:
Arthur Nikisch Facts for Kids. Kiddle Encyclopedia.