Abbado was born in Milan, Italy. His father played the violin and composed. He started to learn the piano from his father. He studied music at the Milan Conservatory and often had the opportunity to listen to famous conductors rehearsing, e.g. Arturo Toscanini, Bruno Walter and Wilhelm Furtwängler. He did not like the way that Toscanini shouted and yelled at the orchestra. He knew that he did not want to be like him. 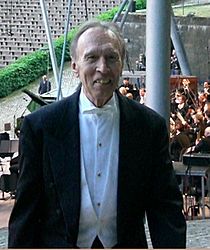 In 1989, the Berlin Philharmonic Orchestra chose Abbado to be their conductor, to succeed Herbert von Karajan. Abbado stayed with them until 2002 when he left because of his bad health, although he returned in 2004 to make several recordings with them.

In 1988, he started the music festival Wien Modern (Vienna Modern). This festival is now not just for modern music but other forms of modern art as well.

He often conducted the Chamber Orchestra of Europe and has recently worked with the Orquesta Sinfónica Simón Bolívar of Venezuela. Abbado was found to have stomach cancer in 2000 and he had a major operation. After he got better he started the Lucerne Festival Orchestra in 2003. He is also music director of the Mozart Orchestra of Bologna, Italy.

Abbado's son Daniele is an opera-director. From his relationship with the violinist Viktoria Mullova, he is the father of her oldest child, Misha. His nephew Roberto Abbado is also a conductor.

All content from Kiddle encyclopedia articles (including the article images and facts) can be freely used under Attribution-ShareAlike license, unless stated otherwise. Cite this article:
Claudio Abbado Facts for Kids. Kiddle Encyclopedia.