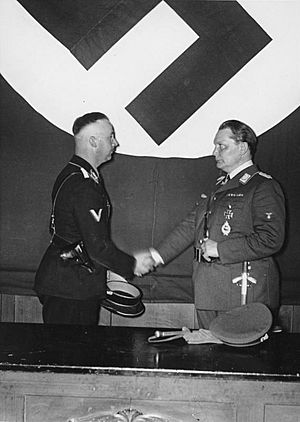 Heinrich Himmler and Hermann Göring at the meeting to formally hand over control of the Gestapo (Berlin, 1934).

The Gestapo was the official secret police of Nazi Germany.

Hermann Göring formed the unit in 1933. Beginning on 20 April 1934, it was under the administration of SS national leader Heinrich Himmler, who in 1936 was appointed Chief of German Police (Chef der Deutschen Polizei) by Hitler.

The name stands for Geheime Staatspolizei. This means "secret state police". It was under the overall administration of the Schutzstaffel (SS).

The Gestapo were allowed to arrest people that offended the government in any way. The government could use the secret police to accuse and arrest anyone they wanted without being questioned.

All content from Kiddle encyclopedia articles (including the article images and facts) can be freely used under Attribution-ShareAlike license, unless stated otherwise. Cite this article:
Gestapo Facts for Kids. Kiddle Encyclopedia.