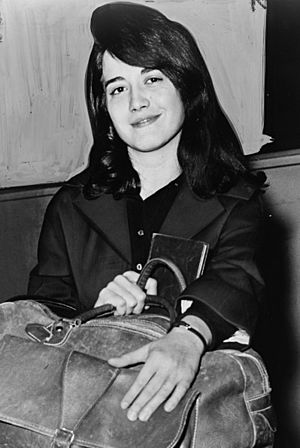 Argerich was born in Buenos Aires and started playing the piano at age three. At the age of five, she moved to teacher Vincenzo Scaramuzza. Argerich gave her first concert in 1949 at the age of eight. The family moved to Europe in 1955 where Argerich studied with Friedrich Gulda in Austria. She later learned with Stefan Askenase and Maria Curcio. Argerich also had brief periods of learning with Madeleine Lipatti (widow of Dinu Lipatti), Abbey Simon, and Nikita Magaloff. In 1957, at sixteen, she won both the Geneva International Music Competition and the Ferruccio Busoni International Competition, within three weeks of each other.

Argerich started to become famous around the world when she won the Seventh International Chopin Piano Competition in 1965 at the age of 24. She also made a recording in the same year, including pieces by Chopin, Brahms, Ravel, Liszt, and Prokofiev.

All content from Kiddle encyclopedia articles (including the article images and facts) can be freely used under Attribution-ShareAlike license, unless stated otherwise. Cite this article:
Martha Argerich Facts for Kids. Kiddle Encyclopedia.