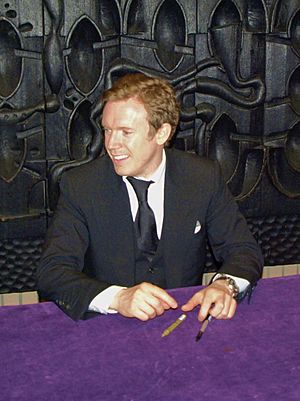 Harding studied trumpet at Chetham's School of Music in Manchester. When he was 13 he became a member of the National Youth Orchestra. When he was 17, Harding got together a group of musicians to perform Pierrot Lunaire by Arnold Schoenberg. He sent a tape of the performance to the conductor Simon Rattle in Birmingham. Rattle was very impressed and invited Harding to be assistant conductor to him at the City of Birmingham Symphony Orchestra for a year, from 1993-1994. Harding then went to the University of Cambridge, but after his first year at university, he was invited by Claudio Abbado to be his assistant with the Berlin Philharmonic Orchestra.

Harding has been conductor of the Trondheim Symphony Orchestra (1997-2000), the Deutsche Kammerphilharmonie Bremen (1999-2003) and the Mahler Chamber Orchestra (since 2003). He conducted the 2005 opening night at La Scala, Milan in Idomeneo, after Ricardo Muti had resigned.

Harding is married and has two children. His wife plays the viola. He is a fan of the football club Manchester United.

All content from Kiddle encyclopedia articles (including the article images and facts) can be freely used under Attribution-ShareAlike license, unless stated otherwise. Cite this article:
Daniel Harding Facts for Kids. Kiddle Encyclopedia.