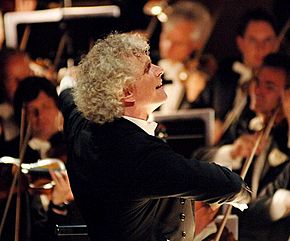 Sir Simon Denis Rattle CBE, (born Liverpool, 19 January 1955) is an English conductor. He became internationally famous as the conductor of the City of Birmingham Symphony Orchestra which he made into a world-class orchestra. Since 1999 he has been the conductor of the Berlin Philharmonic.

Rattle was born in Liverpool and studied at Liverpool College. He learned to play the piano and the violin. He started to play in orchestras, but as a percussionist. He went to study at the Royal Academy of Music in London in 1971. Three years later he won the John Player Conductor Competition. He organised and conducted a performance of Mahler's Second Symphony whilst still at the Academy. He spent a year studying English Language and literature at St Anne's College, Oxford.

Career in the UK

He spent 18 years as conductor of the City of Birmingham Symphony Orchestra (CBSO), from 1980 to 1998. During this time he made the orchestra into one of the best European orchestras. The orchestra used to give their concerts at the Town Hall in Birmingham, but a new concert hall, the Symphony Hall, was opened in 1991. The BBC made a film about Rattle and the CBSO during his last year with the orchestra. It was called: Simon Rattle — Moving On.

Rattle was given the award of CBE in 1987 and made a Knight Bachelor in 1994. In 1992, Rattle was made Principal Guest Conductor of the Orchestra of the Age of Enlightenment (OAE), together with Frans Brüggen. Rattle now has the title of Principal Artist with the OAE. In 2001, Rattle conducted the OAE at Glyndebourne in their first production of Beethoven’s opera Fidelio with a period instrument orchestra.

In May 2006 he was made an Honorary Member of the Society of Arts.

The first time Rattle conducted the Berlin Philharmonic (BPO) was in 1987 when he gave a performance of Gustav Mahler's Symphony No. 6. In 1999 Rattle was made chief conductor of the orchestra when Claudio Abbado left. Before he agreed to take the job he insisted on making some changes to make sure that all the orchestral members were paid fairly and that the orchestra could make its own decisions instead of having to do what the Berlin Senate told them.

Before he left England he said some very critical things about the British attitude to culture, especially to music. He thought that not enough money was being spent on the arts and that the politicians were not interested in music.

He gave his first concert as principal conductor of the BPO on 7 September 2002, leading performances of Thomas Adès' Asyla and Gustav Mahler's Symphony No. 5. He has done many new things since working in Berlin. He has continued to conduct the music of many living British composers. He has formed an educational programme so that young people in Berlin get used to hearing classical music. Some people have criticised what Rattle has done in Berlin, but many people support him.

Rattle was originally going to stay with the BPO until 2012, but in April 2008 the players decided they want him to stay until 2020

In 1993, Rattle conducted the Philadelphia Orchestra. They wanted him to be their chief conductor, but Rattle could not take on the job. Instead, he often performs as their guest conductor.

Rattle has conducted lots of different music, sometimes old music with period instruments, sometimes music by living composers. He is very well known for his performances of Mahler. He has won many awards for his recordings.

Rattle has been married three times. He is a fan of Liverpool F.C.

All content from Kiddle encyclopedia articles (including the article images and facts) can be freely used under Attribution-ShareAlike license, unless stated otherwise. Cite this article:
Simon Rattle Facts for Kids. Kiddle Encyclopedia.